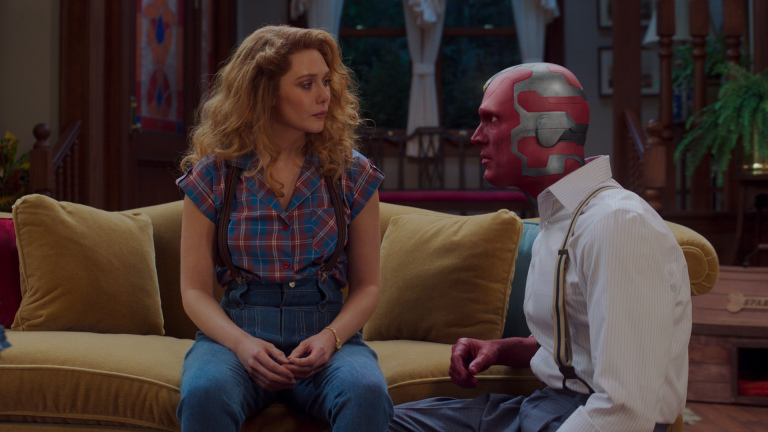 After a very disappointing first two episodes of WandaVision, I had no taste for another bite. My granddaughter convinced me to give it another try. Through twenty-five minutes of episode three, it was more of the same. Then, finally, the show takes on a completely different trajectory and, like the Avengers, it soars. Other than trying to attract an older viewership with recollections of TV shows from their youth, I believe most of sitcom nonsense is filler. Still, the backstories and tie-ins breathe new life into the Avengers and set the stage for the future. And, an exciting future it appears to be.

Realistically, does a WandaVision Redux deserve a 4.5 Gavel rating? Did Disney get $150 million value for this nine-part series? The early episodes get an average 7.65/10 IMDb score but the later episodes average over 9/10 IMDb. Across all platforms, it is the most watched show in January 2021. Most importantly, the actors get a chance to act, the story arc leaving the silliness behind. How good is the story? Even the critics can’t complain as WandaVision Redux garners a 92% Rotten Tomatoes Rating.

Not only stuck in sit-com mode, Wanda is now pregnant. Vision notices a change in her demeanor, but doesn’t yet comprehend why. Cast out of Westview for suggesting that Vision had been killed by Ultron, Geraldine/Monica now meets with SWORD. Are the residents of Westview in danger? How did Vision come back to life? Does Wanda have the ability to control the minds and actions of all those in Westview? Even Wanda doesn’t the all the answers? But one thing is sure. She now has $3 billion of vibranium under her control and SWORD wants it back!

Ho-hum is the adjective to describe Elizabeth Olsen, Paul Bettany, and Kathryn Hahn after two episodes. But give them a little drama, and it all comes into place. Wanda, Vision, and Agatha shine once SWORD enters the picture. Monica Rambeau, Jimmy Woo, and, and Darcy Lewis spice up the set as they try to help Wanda before acting director Tyler Hayward unleashes the weaponry of SWORD upon her.

“If Wanda is the problem, then she has to be part of the solution,” notes Monica. Hayward is taking no chances. Can a witch (Agatha) from the year 1693 be more powerful than Wanda? Is Wanda capable of Chaos Magic? Stay tuned this Friday Night!

“WandaVision is tapping into a power that the MCU has been sitting on for a decade, and like Wanda ripping Thanos apart in Endgame, it’s about time we see what this thing can really do.” AV Club

“The result wields more of a scalpel than a hammer, wryly celebrating the history of television while slowly, very slowly, pulling the viewer into an enticing “The Twilight Zone”-esque mystery.” CNN.com

Until now, only The Greatest Showman received a redux, although Ted Lasso should also be in that category. With the WandaVision Redux, I can safely say that, ultimately, neither Disney nor Marvel let me down.