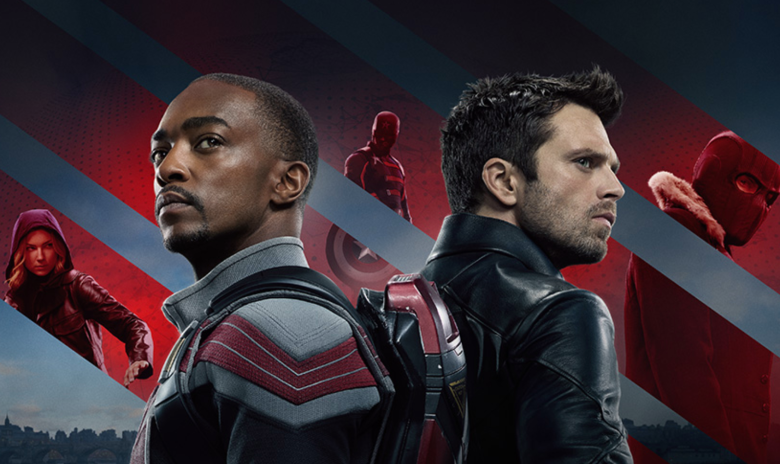 While early WandaVision mired down in 1950’s TV, The Falcon and the Winter Soldier wasted no time soaring into action. The terrorist group, LAF, targets an Air Force Captain for kidnapping and interrogation. With the assistance of 1st Lt. Torres on the ground, Sam Wilson aka The Falcon is dispatched to the rescue as the plane is about to enter Tunisian airspace. Using Stark technology like the Red Wing, The Falcon breaches the flying aircraft and dodges heat-seeking missiles while flying through canyons. This is darn good CGI. Where can I get one of those Red Wings?

As Marvel enters Phase Four, it takes some genius to keep track of all their projects. Of course, this Disney+ six-part series is just one branch, to be followed by Loki, Hawkeye, Ms. Marvel, and many, many more. Generally reluctant to grant such high praise after only one episode, The Falcon and the Winter Soldier brings great promise. Captain America’s shield weighs so heavily on Sam that he decides to have it displayed at the Smithsonian. Bucky Barnes aka Winter Soldier received his pardon on condition that he undergo psychiatric therapy. After 90 years of murder, the nightmares do not fade easily into the darkness. He wants, rather he needs, to make amends. The Falcon and the Winter Soldier sets these two on a path to work together in spite of their inclinations. Expect the unexpected. I give the show 4.5 Gavels with an 8.7/10 IMDb score.

Missing for five years during the Blip, Sam’s return to Delacroix, Louisiana is welcome but not his unwillingness to sell the family fishing boat. Sarah Wilson is unable to secure a loan and Sam’s lack of income provides no relief. Leah accepts a date with the out-of-practice Bucky, but he bails out early. These are flawed men. Still, the Flag Smashers are out of control in Switzerland. Do they really want to return to life under the Blip? And, where will the LAF attack next? Is Hydra dead? Who is this new Captain America dude and can we trust him?

Reprising their roles from Avengers: Endgame, Sebastian Stan (I, Tonya, Black Panther) is Winter Soldier and Anthony Mackie (Detroit, The Banker) is the Falcon. Both are off to a compelling start. Haven’t seen enough of her since Bosch, here Amy Aquino is Bucky’s therapist. Not in episode one, but Emily VanCamp is Peggy Carter’s (Agent Carter) niece. I’ve lost track of her since the days of Evergreen and Revenge.

Dr. Raynor warns Bucky “if alone, that is the quietest, most personal hell.” At age 106, and a former assassin, he has little in common with others. The politicians demand a substitute for Captain America. Why did Sam feel so inadequate. Will he regret not assuming the mantle?

“Nothing about the first action sequence is subtle, and its lack of subtlety is Marvel’s way of telegraphing that, with this second Disney+ television addition to the Marvel Cinematic Universe, no expense, visual effect, or daring stunt work will be spared.” Vulture

“With its kinetic opening, The Falcon and The Winter Soldier finds the MCU paying homage to itself. This franchise has always been self-referential. Now it appears to be self-reverential.” Den of Geek

Many proclaim this to be a six-hour movie broken up for Disney+. It’s off to a grand start.