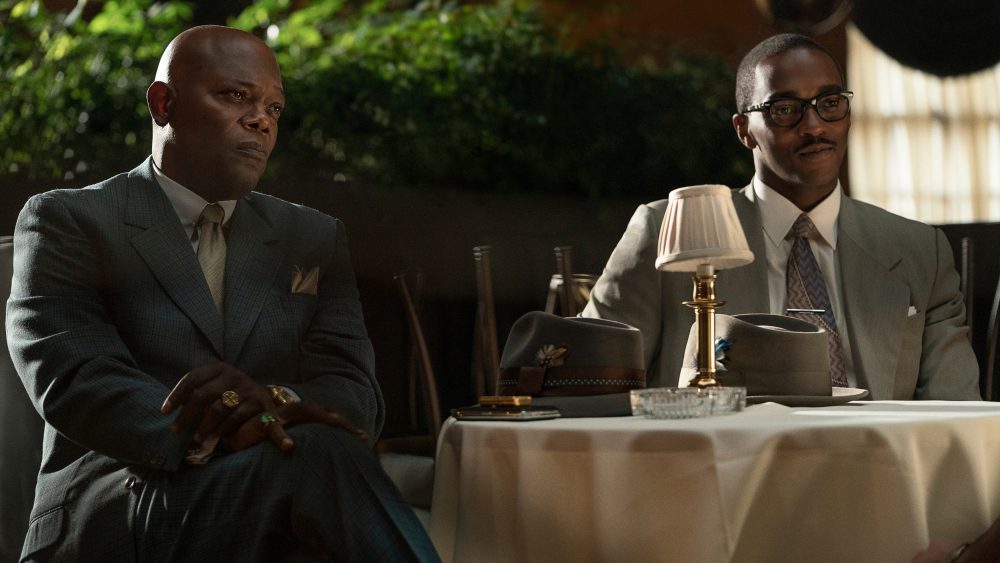 Most companies could not afford to mess up a roll-out. First, Apple TV+ puts out an underwhelming The Morning Show, then has to pull its first major movie production. Since The Banker begins with the dreaded “inspired by true events” caption, I naturally wondered how much they made up. It turns out that since the son of the major character is accused of sexually abusing his half-sisters (see Deadline 11/25/19), no publication bothers to check the facts of the movie (see Deadline 1/17/20). All that aside, The Banker is quite the historical flick, set in the 1950’s and 1960’s during a time when it was nearly impossible for blacks to own real estate in white areas, let alone banks. I give the film 3.5 Gavels and it receives a 63% Rotten Tomatoes rating with a small sample 100% Audience score.

Young Bernard Garrett, dreams of becoming wealthy, to the extent of eavesdropping on rich, white guys. Scoffed at by friends and relatives, he moves to California. Playboy Joe Morris, owner of a fancy restaurant, is skeptical, but agrees to partner with Garrett’s plan to buy commercial and residential properties. But to do so requires a front man, and naive Matt Steiner is just right color. Now, rich enough to have their picture taken with Vice-President Lyndon Johnson, something is missing. Why not return to segregated Texas and buy a bank? The con works in California, why not Texas?

Whatever he does, I can’t get enough of Samuel L. Jackson. As cynical Joe Morris, he is a delight. He doesn’t trust white folks, but then again, he doesn’t trust black folks much either. Just the opposite is Bernard Garrett. While Morris is wild and crazy, Garrett is straight-laced and trusting. Anthony Mackie nails the part. Nicholas Hoult is the out-of-his-element, Matt Steiner.

While it gives humor to The Banker to see Garrett and Morris dressed as a janitor and chauffeur in order to protect their investments, it is also quite the sad commentary on racial injustices. At a cost of only $11 million, Apple should be pleased with the final product, if not with the attendant controversy. Some may balk at the amount of math used (think The Big Short), but I found it realistic for investors. Did the actions, and subsequent Congressional testimony, of Garrett and Morris precipitate The Fair Housing Act of 1968? Likely, they were just one piece of a much, much larger puzzle. That said, as one critic writes, watch The Banker “with interest.”