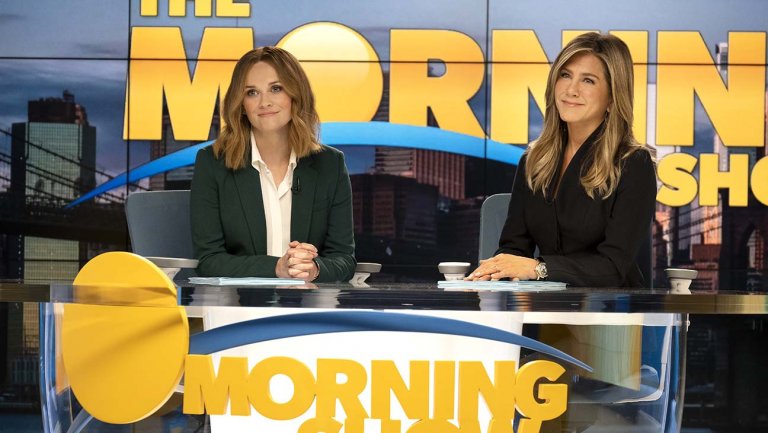 A rule of thumb for a new series is that I must give it at least 2 or 3 episodes before I move on. The Morning Show on Apple TV+ tests that rule. These are some of the most angry, miserable, self-centered characters that you are likely to meet. Early on, a cameraman tells reporter Bradley Jackson that she will never work her way up because “no one likes her.” And, she is the most likable of the bunch.

Normally, the introductory episode gives you a reason to continue to watch, but not here. It’s hard to imagine Apple paying this many great actors and getting so little in return. For months, this was actually a Rotten Tomato show but it recently edged up into the Ripe area with a 61% rating. I give the show 3 Gavels and it has a surprisingly good 94% Audience score. This, I attribute to the quality of the actors rather than the quality of the show.

Alex Levy and Mitch Kessler co-host The Morning Show for the last 15 years. Like The Today Show, it is the flagship for the UBA Network. Like Matt Lauer, Kessler is fired for sexual misconduct. The executives were about to non-renew Levy’s contract and seek a new direction for a show they felt stale. In the midst of renegotiation of her contract, she demands control over naming the new co-host. The response leads to anger, threats to resign, conflict, and a surprising new look!

If you are confused by the names, yes, Alex and Bradley are Jennifer Aniston and Reese Witherspoon, respectively. Steve Carell is Mitch. Typically, with these three, and a morning show, one thinks something lighter and comedic. Rest assured this is no comedy. Now, add in Billy Crudup as the Machiavellian executive in charge, Mark Duplass as the overmatched producer, and Gugu Mbatha-Raw as the head talent booker. Not enough? Throw in Mindy Kaling and Martin Short as guests in early shows.

In Bombshell, I asked when we might see a Matt Lauer expose? The producers claim The Morning Show was written before that saga but the similarities are striking, right down to the button that closes a door. As you might imagine, the production quality is excellent, befitting a flagship show for AppleTV+. Further, Season 2 is on order. USA Today cites critics” reviews using terms as “brutally dull” and a “snore.” On the other hand, most agree that Billy Crudup is THE reason to watch. Much of the problem is that the inner workings of a morning show are just not that interesting. It is not surprising that it focuses more on entertainment than news. In the end though, the viewer must care about the characters. As for me, I switched to The Evening News!