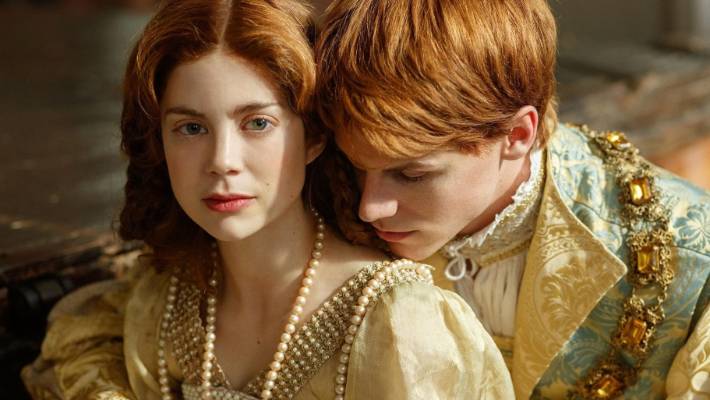 Finally rid of the nasty Margaret Beaufort in season one of The Spanish Princess, Catherine of Aragon meets an even greater foe in Thomas Wolsey in The Spanish Princess 2. Notably, Town and Country magazine headlines “The Spanish Princess 2 Is Not 100% Historically Accurate, But That’s Not the Point.” Through four episodes of the Starz presentation, with four more to go, Catherine goes from Camelot to suffering the “shameless machinations of Wolsey.” While Henry leads his army in France, Catherine defeats the French-allied Scots at Flodden. But, Henry wants a wife, not a soldier.

Such is the life of the female in the early 1500’s of The Spanish Princess 2. Sister Meg is sent to marry King James IV in Scotland who hate the English. After Spain betrays England, sister Mary’s betrothal is changed from Spanish Prince Charles to King Louis XII of France who also loathe the Brits. Alliances by marriage seem to carry little weight with the men who rule their countries. And, that is why history and the days of Henry VIII can be so darn interesting. Who is conspiring against whom, and why? Once again, beautifully filmed and costumed, I give The Spanish Princess (Season 2) 4.0 Gavels and it receives an early 7.6/10 IMDb average.

In 1511, Henry and Catherine seem to have the perfect life. Spain will ally with England against French aggression against the Pope. A son is born. Catherine is the trusted advisor to Henry. Then, the loss of a child, Spain’s duplicity at San Sebastian, and Wolsey’s increasing influence put deep cracks into the relationship of the Royal couple. Catherine tells Wolsey that “none shall come between us.” Then again, nothing is more important than a male heir to the throne.

Still not entirely sold on Charlotte Hope as Catherine, admittedly she is a difficult figure to capture. Ruairi O’Connor, also seen in The Morning Show, is beginning to fulfill his potential as the mercurial Henry VIII. We are just seeing short glimpses of Andrew Buchan (Garrow’s Law) as Thomas More and Philip Cumbus as Thomas Wolsey. Both are integral to the story and need more screen time.

“The palace is not a home; it is like a gaming board,” says Lady Pole, perfectly describing the life of The Spanish Princess 2. Through the numerous pregnancies of Catherine, the series provides a peek into the medieval practice of “confinement.” No men allowed!

Paste Magazine writes “amid many horrors, one of the pure delights of this new run of episodes is when the women of court (and some of the men) scheme against the smarmy and overly-ambitious Wolsey.” Tell-Tale TV notes “in a just world, a woman like this would have never been asked to play second to anyone — let alone ultimately be judged and found wanting because of infertility issues beyond her control.” As The Spanish Princess 2 continues, we know that more trials, and judgments, await.