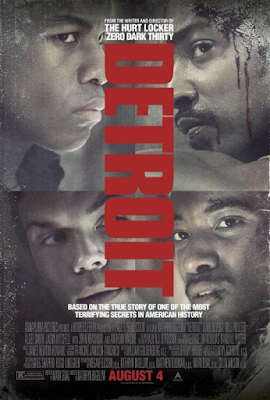 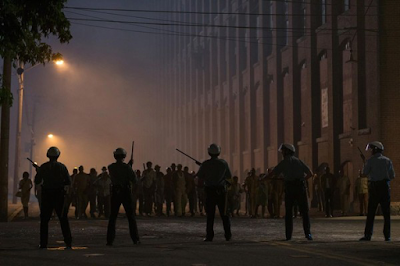 After viewing Detroit, I am convinced that if Kathryn Bigelow had directed Dunkirk, Dunkirk would be the 5 Star movie that critics are suggesting rather than the disappointment it is.  The 1967 Detroit riots took place over five days and Bigelow takes you right along with it, looting and snipers and all. You feel the tension, the frustration, the sheer madness of it all.  Most importantly you get background, some almost in a documentary fashion.  This is a movie that sucks you in, gets you involved.

In 1967, Detroit was a powder keg waiting to explode.  A party at an unlicensed establishment led to the arrest of 80 blacks.  As they are being hauled off to jail, rocks are hurled at police, then at businesses, then fires started.  Responding firemen are attacked; the National Guard is called in.
On edge because of sniper fire, the “law” responds with force when a starter pistol is fired from the Algiers Motel.  The “interrogation games” lead to the death of three young men, and ultimately to the indictment of three Detroit police officers.

Algee Smith plays Larry Reed who was the original lead singer for the Dramatics.  How this changed his life is one of the main stories contained in the movie.  John Boyega plays Melvin Dismukes, a black security guard who tries to intervene and becomes victim of the “no good deed goes unpunished” rule.  Will Poulter is Philip Kraus, the white police officer that is as evil and brutal a character as you will find.  His partner in crime is Ben O’Toole as fellow officer Flynn.  All of these actors were excellent.  John Krasinski (The Office) has a brief part as the defense attorney for the officers.

The movie is not without flaws as indicated when the screenwriter admits that he took poetic license and tweaked the dialogue.  I am also not a fan of hand-held cameras.  Still, warts or not, it is one powerful movie.  Just after the Ray Tensing verdict, one can understand why some feel that justice is an elusive concept.  It certainly will touch lots of raw nerves.  The “interrogation games” scene lasts 42 minutes and is not easy to watch.  This is not a movie for youngsters or those with queasy stomachs.  It is, however, a movie worthy of Oscar consideration.  As always, if you want more info see www.historyvshollywood.com/reelfaces/detroit/.