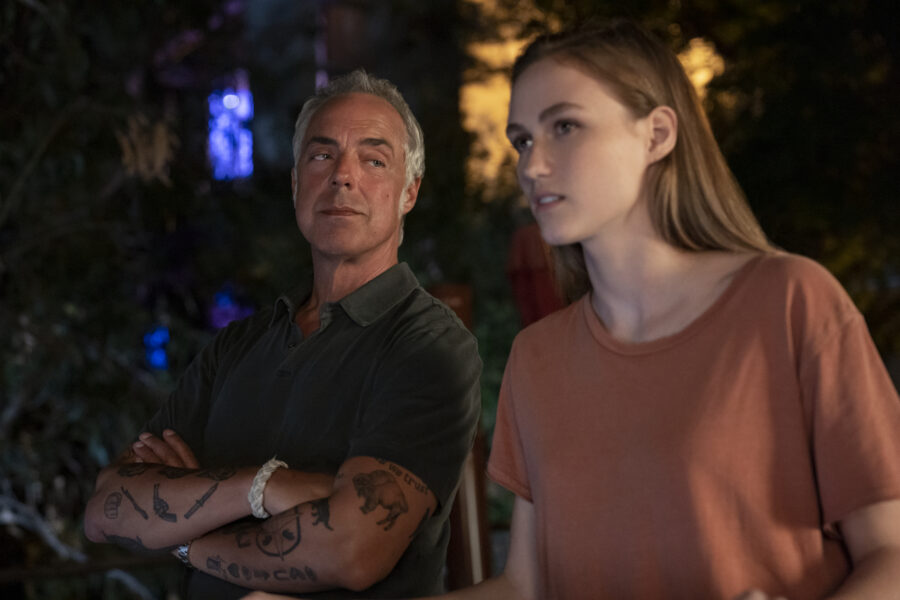 If you are not familiar with Bosch, based upon the Michael Connelly novels, stop everything! Now in Season 6 on Amazon, the average, mind you average, Rotten Tomato score for each season is 96% and the average Audience score is 95%. Do you need to watch the prior seasons? Probably not, but the characters are so well developed that you will head back to Season 1, anyway.

Bosch (Season 6) brings us a cold case, dirty cops, mayor’s race, sovereign citizens, murder and terrorism, and that’s just in Episode 1. Bosch, trusted by the police chief, gets some special treatment by his superiors because he gets results. Others in law enforcement have differing opinions. It is this dynamic that works so well as the opening song repeats “I got a feeling that I can’t let go.” I have a feeling that Bosch will bash the bad guys and I give it 4.5 Gavels.

Eleven months after Season 5, Harry Bosch is still haunted by the death of 14 year old Daisy Clayton, some ten year earlier. His partner, Jerry Edgar, investigates two corrupt cops. In the midst, medical physicist steals cesium from a hospital as ransom for his kidnapped wife. His body is found on The Overlook. The massive search begins to locate the extremely toxic substance before it kills thousands and closes Dodger Stadium for 300 years. Did I mention that Police Chief Irving is running for Mayor of Los Angeles?

Titus Welliver has somewhat of an odd acting style, reminiscent of David Caruso cocking his head in CSI: Miami. Still, as renegade detective Harry Bosch, this is his iconic role. Likewise, Jamie Hector‘s portrayal of Jerry Edgar allows him to blossom from questioning sidekick to major role-player. Another stiff, but effective, actor is Lance Reddick. Police Chief Irving does not suffer fools lightly. Madison Lintz plays Bosch’s daughter, Maddie. Now living with her father, this “intern” always comes up with a surprise or two.

At any one time, Bosch uses six, or more, detective teams working on various cases. This “old-fashioned detective yarn” does a very well showing their interplay, and sharing of tidbits of information. One critic notes “the exploration of moral gray areas makes Bosch more captivating than the average police procedural. Amazon’s long-running cop show has once again proven itself to be the most reliably entertaining series of its kind on TV.” Another writes “nuanced writing and a marvelous performance by Titus Welliver make Harry a singular character, a California combo of stone-faced avenger, laid-back hipster and tireless gumshoe.” Admittedly, the many subplots can be a bit perplexing at times, but that is part of its charm. I have been a huge fan of Bosch from its first episode and this season builds wonderfully on the past. Like Anne with an E and Outlander, it’s time to binge Bosch!