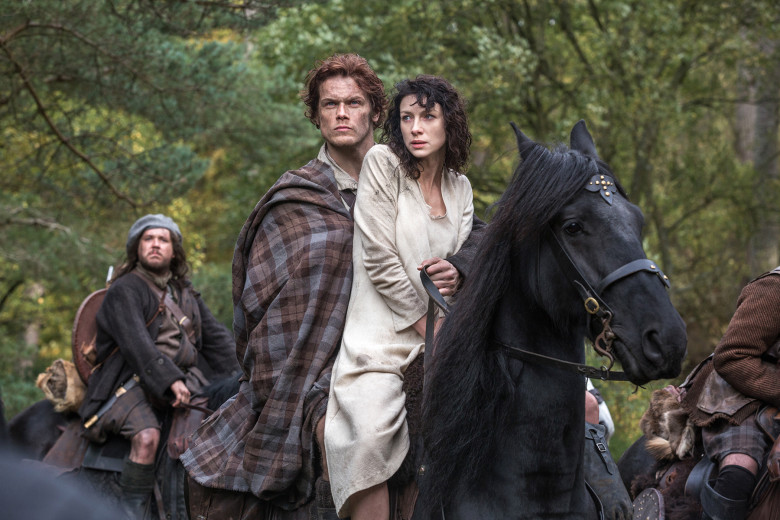 At various times since the 1940’s, critics declare a Golden Age of Television. Like All The President’s Men, I say “Follow the money!” The big money doesn’t go to ABC, NBC, or CBS; it now goes to cable and to the streaming services. Competition is good for the viewer, if he can find it at an affordable price. One of my many guilty pleasures is Outlander, ready to start Season 5 on Starz on February 16.

What The Game of Thrones was to HBO, Outlander is to Starz. A big, beautiful, sprawling epic spread across Scotland, London, Paris, Jamaica, and the Colonies, Outlander intertwines history and love across two centuries. CinemaBlend declares it to be the best show on TV. With actors and writers taking risks on big multi-episode, multi-season projects, this is the true Golden Age. I give this show 4.5 Gavels and it receives a 91% Rotten Tomatoes rating with a 90% Audience score.

in 1946, nurse Claire Randall and her professor husband, Frank, are researching the Battle of Culloden. At the stones of Craigh na Dun at Inverness, she is transported 200 years back in time. Accused of being a witch but eventually accepted as a healer, she falls in love with Jamie Fraser. Aware that the Jacobite rebellion against the Crown is doomed to failure, she warns Jamie, to no avail. History can’t be changed, or can it? Will she ever see Frank again? And, does she want to?

Catriona Balfe is our time traveler Claire, just perfect for the role. How perfect? Two People’s Choice awards and four Golden Globe nominations perfect. Opposite our former model is Sam Heughan, the hulking hero Jamie Fraser. Headstrong and determined, he gets into and out of scrapes as well as any fictional character. Tobias Menzies, also currently in The Crown as Prince Philip, plays the unlucky Frank.

How do you find Outlander without subscribing to Starz? You can watch Season 1-3 on Netflix. I ordered Season 4 through Amazon. If there is a complaint about Outlander, at times it feels like a soap opera. But, overall, the scenery, the costumes, the history, and the story overcome any hindrances. You get castles, kings, governors, ships, battles, prejudices, ignorance, enlightenment and family, all well worthy of binge-watching. Like The Game of Thrones, I’ll warn you that you will see frequent nudity, although not as graphic. It seems the writers are mostly faithful to the Outlander book series, although they do promise some surprises. Just about to start book five, it appears that at least three more seasons are likely. So, now is a good time to catch up! This one will get its hooks into you.