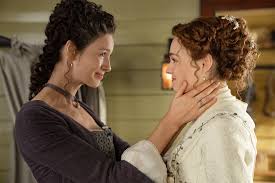 What do Taraji P. Henson, Claire Foy, Elisabeth Moss, and Sandra Oh have in common? Nominated four years in a row for a Golden Globe for her work in Outlander, Caitriona Balfe lost to each of the foregoing. Still, that is quite the competition. Maybe Outlander 5 (Season) on Starz will finally get her the trophy she deserves. If unfamiliar with Outlander, first read my post of 2/7/20 for background.

Outlander 5 brings us the beauty of the North Carolina Blue Ridge mountains filmed mostly in, where else, Scotland. The grand new house on Fraser’s Ridge, making candles, dyeing clothes, looks straight out of Williamsburg. Yet, for all the peace and serenity of the back country, treachery and violence await Jamie, Claire, Brianna, and Roger. Colonial America can be a vicious place. Outlander 5 continues to inform (Battle of Alamance-was it the opening salvo of The American Revolution?) as well as entertain. I give the series 4.5 Gavels and it receives a 95% Rotten Tomatoes rating with an 88% Audience score.

Fraser’s Ridge, now firmly established with settlers, rests uneasy. Both the English and colonialists know war is coming. Sworn allegiance to the crown in exchange for his property, Jamie understands that it is only a matter of time until Governor Tryon demands he take up arms against the Regulators and his uncle, Murtagh Fitzgibbons. Claire rants against the medical customs of the time, aware she treads on thin ice. Brianna learns that her rapist’s body was never found. Can Stephen Bonnet still be alive? A fish out of water, will Jamie ever respect Roger? To be safe, should Brianna and Roger return to 1969?

Initially paid a reported $100,000 per episode, Caitriona Balfe (Claire) and Sam Heughan (Jamie) get a producers title for Outlander 5. Although often without clothes in the show, presumably they now can afford Armani, Gucci, and Prada. Did you see Balfe in Ford v Ferrari? As Outlander 5 evolves, Sophie Skelton (Brianna) and Richard Rankin (Roger) move to center stage. A veteran of such shows as Foyle’s War, another bingeworthy Brit series, early on Skelton overshadows Rankin. This season, he comes into his own, an equal partner.

“There’s a time for men of peace, and a time for men of blood,” is a line delivered from an unlikely source, Roger. But, ominously, a foe says “you did what you must. . and so will I, when the time comes.” A fine set-up for Outlander 6. Collider reports that “in its fifth season, the time travel period romance has truly found its footing… the series has now found a new level of maturity which matches its central characters.” TV Guide writes “even when Outlander ventures into darkness, it still remembers its joyous spirit and finds new ways to make even small moments feel sweeping.” “Let the stones take you home” to this fine Starz presentation. In fact, time travel has never been more fun.