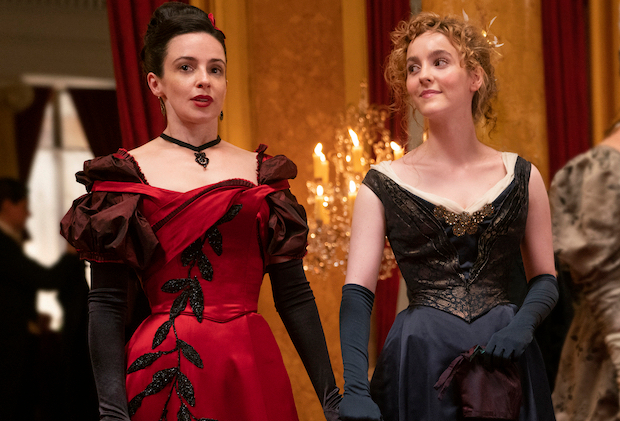 Imagine the X-Men (or, should I say X-Women) in Victorian society and you get The Nevers. In this case, Joss Whedon gives the viewer an incredible new world with fascinating characters dressed in fabulous costumes. On 8/3/1896, for some reason, mostly women received extraordinary abilities or biological anomalies, depending on your perspective. They were “touched,” but by God or by the Devil? Like the X-Men, some in society want them eliminated, some want them protected. Although not a direct parallel to Charles Xavier, benefactor Lavinia Bidlow is in a wheelchair. Not all of those with “gifts” are “good guys,” as Maladie is currently on a killing spree. Introducing twenty new characters is never simple, and The Nevers is no different in that regard. Still, I can’t wait for Episode Two.

The Nevers is a six-part series shown weekly at 9:00PM on Sunday nights. Shown below is the “prototype” motorized three wheel vehicle shot out of the back of a stagecoach chased by bad guys with shotguns. That scene alone was worth the proverbial price of admission. Penance Adair’s “superpower” is that she is an “inventress.” Though much more sophisticated, her gadgets remind one of Robert Conrad and The Wild Wild West TV show of 1960’s.

Ms. Adair is the best friend of Amalia True who runs the Orphanage. Amalia has the ability to see snippets of the future “sometimes more confusing than enlightening.” She also can kick butt. Together, they must gather the “touched,” not “so they will be safe, but so they will be less lonely. That will be a start.” It’s never quite fair to rate a show after but one episode, but “intrigued” is my impression. I give The Nevers a 4.0 Gavel start, much higher than the critics 52% Rotten Tomatoes rating with the viewer 7.0/10 IMDb score somewhere in the middle.

Amalia and Penance receive the call to help Myrtle Haplisch, who can only speak in foreign languages. They interrupt Shock Troopers attempting to kidnap her. Foiling the crime, they wonder why would someone try to kidnap Myrtle, and if she’s the first. Meanwhile, Lord Massen and the government watch the “touched” with great concern. Aware of Maladie’s killing spree, just what is the extent of the threat? Horatio Cousens has the power to heal, but afraid to be labeled a voodoo doctor. Hugo Swann runs a private club, The Ferryman’s, who sole purpose seems to extort his customers, perhaps including “partner” Detective Mundi. Lavinia Bidlow supports the Orphanage because “it’s time society accepted the ‘touched” are amongst us.”

Direct from Outlander, Laura Donnelly provides the skill and mystery that is Amalia True. While Penance Adair, acted by Ann Skelly, may appear a little ditzy, never underestimate her intelligence and loyalty. From priest on Grantchester to pansexual and sex club owner, James Norton makes the huge transition to Hugo Swann. Fans of Poldark will recognize Eleanor Tomlinson as Mary Brighton. Her song tells “the touched” they belong here. Consistent with a production of this quality, this is just a few of an impressive cast.

Notably, the dialogue is top-notch. For example, Lord Massen is “the last line of defense against the scourge of modernity.” Did allegations of misconduct cause HBO to remove Joss Whedon from The Nevers in November 2020? Does that influence opinion of the show?

“The visuals dazzle and the action scenes thrill on a show that’s part X-Men and part Doctor Who.” Chicago Sun-Times

“It would fit a tidy narrative if The Nevers was terrible . . . but it’s not. The rollicking pilot, which Whedon wrote and directed, is the most unexpectedly entertaining, hour-long TV joyride so far this year.” Pittsburgh Tribune-Review

The verdict of the critics is decidedly mixed. It’s your turn. Or, as they might say in The Nevers, “what’s your ‘turn’?”