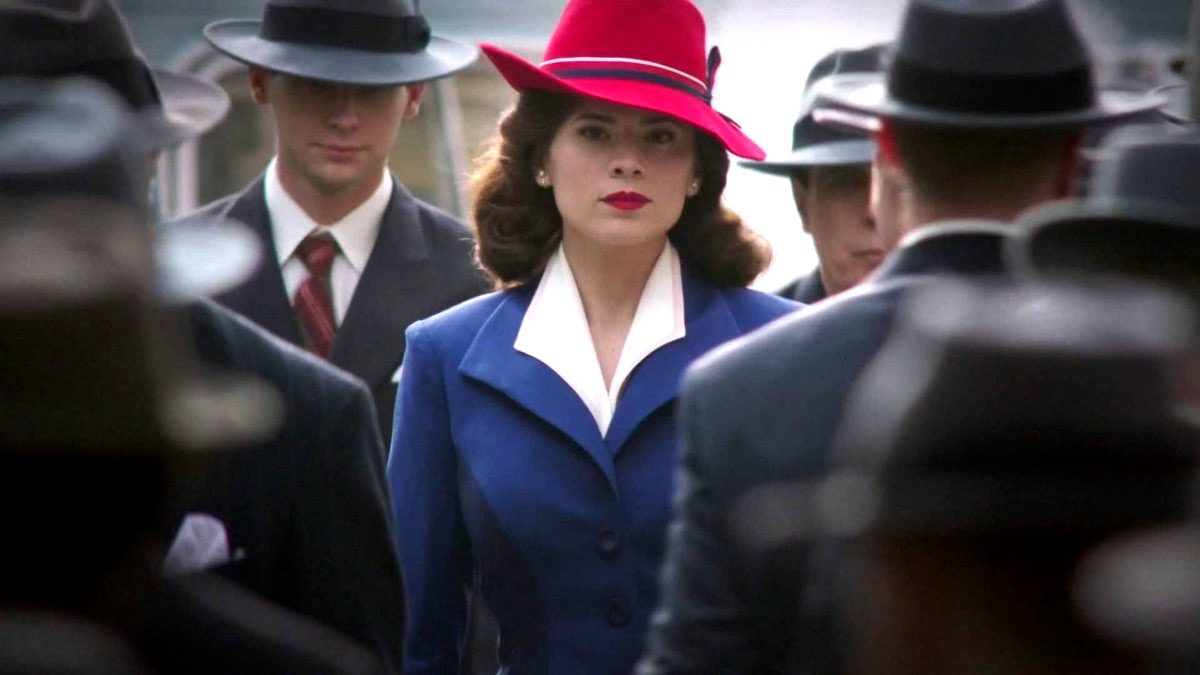 From an initial seven million U.S. eyes in 2015, the viewership of Marvel’s Agent Carter plummeted in 2016. Why? Maybe the audience didn’t like the move from NYC to LA. With a 96% Rotten Tomatoes rating and 88% Audience score, both loved Season One. As for me, I was hooked on episode one. With Wonder Woman, Captain America and Marvel’s Agent Carter, just how did it take us four years to defeat the Nazis? What is Agent’s Carter’s superpower? She’s smarter than the men that surround her.

ABC quickly discovered that period pieces are expensive. Set after World War II and the death of the love of her life (Captain America), the costumes, props, and visual effects are top-notch. Marvel’s Agent Carter ignores the sexist, chauvinistic attitudes of the males around her, or more appropriately, uses them to her advantage. It’s nice to see a Marvel role model without superpowers for a change. But, ABC thought Hayley Atwell more valuable in the series Conviction. That didn’t work out so well. In any case, if you have Disney+, Marvel’s Agent Carter is a worthwhile endeavor. I give the eight-part Series One 4.0 Gavels.

Despite being the right hand woman to Captain America, Peggy Carter is little more than a go-fer to her male counterparts at the Strategic Scientific Reserve. Congress accuses Howard Stark with supplying weapons to our enemies and the SSR must find both him and his weapons. Secretly, Stark convinces Carter that someone framed him, and only she and his butler, Edwin Jarvis, can exonerate him. Uncomfortable with possible treasonous activities, Carter nevertheless works undercover to seek the truth. While her comrades at SSR overlook her, someone seeks her termination. Let the intrigue begin.

From Howard’s End to Criminal: U.K., to Christopher Robin and Blinded by the Light, Hayley Atwell is everywhere. Underestimate Marvel’s Agent Carter aka English at your peril. James D’Arcy (Dunkirk) plays Edwin Jarvis, seemingly dragged into danger due to the exploits of his boss. The rapport of Carter and Jarvis shows in their comedic banter.

For those uninterested in superheroes, rest assured than Marvel’s Agent Carter is more James Bond than Wonder Woman. As AV Club points out, “this is a classic Marvel comics premise: the hassled hero, who has to hide her derring-do.”

“She packs a mean punch, can fire a pistol without blinking and steps into a disguise with the same ease as Jennifer Garner used to do on Alias.” New York Post

“Gosh, Marvel’s Agent Carter is a heck of a lot of fun, and if that statement feels a bit old-fashioned, well, it fits the sprightly period piece about a female secret agent fighting bad guys and sexism just after World War II. San Francisco Chronicle

Alias is probably an apt comparison for Marvel’s Agent Carter. If you enjoy a bit of derring-do, give this one a go.