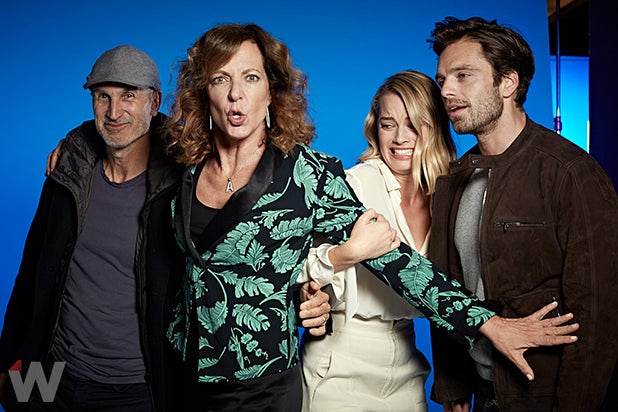 Maleficent, Madame Mim, Cruella De Vil meet LaVona Fay Golden (Tonya Harding’s mother), although even you three might be embarrassed to be in her company.  She is one of the meanest, foul-mouthed, rotten-to-the-core characters that you are likely to come across.  That Tonya survived her childhood was a surprise; that she was part of a criminal conspiracy after abuse by mom and hubby was not.  This is one story that the exact truth may never be known but the abuse suffered by Tonya and the bumbling efforts of her co-conspirators are unquestioned.

Tonya Harding was never a favorite of the ice skating community even though she was the first to attempt and successfully complete the triple axel.  Those in charge looked upon her as trailer trash, not fit to represent the United States, at least until her performances forced them to include her.  In an on again-off again relationship with Jeff Gillooley, she gets a second chance to achieve her dream in the Olympics.  But America’s sweetheart, Nancy Kerrigan, is in her way.  Parts of the movie are interview-style and the “did so, did not” narrative allow the viewer the opportunity to come to his/her own conclusion.

While the story is at times difficult to watch, Margot Robbie as Tonya, is not.  As a young girl in love, you see her innocence.  As a young girl determined to win at all costs, you see her killer instinct.  As Monster expanded the roles for Charlize Theron, this movie should do the same for Robbie.  She is quite good.  Likewise, Allison Janney, as LaVona, just eats up this part.  Actors often say that they love to play the bad guy because it gives them the depth of character to explore.  Janney knocks this one out of the park.  Sebastion Stan is Gillooly and plays the victim even though the facts dictate otherwise.  Julianne Nicholson is Tonya’s coach but her part is very reserved and unremarkable.  Bobby Cannavale has a fun part as a representative of the intrusive media.  Paul Walter Hauser as Gillooley’s sidekick is a character that could not be made up; he is just too bizarre.

While the abuse of Tonya, physical and verbal, is nearly non-stop, the story is so crazy that the black humor creeps in.  For a movie seeking to be a commercial success, it is not a good sign when you must travel to the Esquire and you are put into its smallest theater.  Having said that, the theater was full on a cold Friday afternoon and the movie’s budget was only $11 million.  Maybe the awards season will push it into more and bigger venues.  Still, I don’t expect it to hit a huge wave of popularity as it is an interesting piece of history, but not a pleasant one.  There are not many likable characters in this one, and no Tonya Harding skating dolls coming out anytime soon.