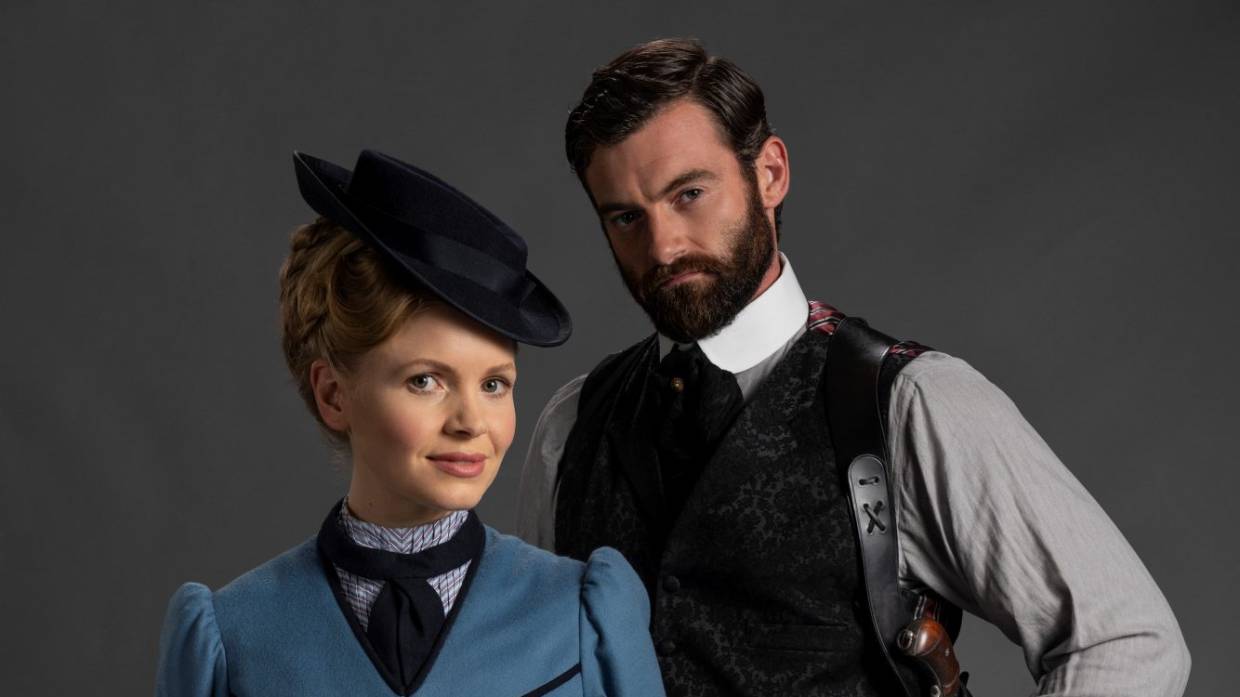 While you are watching All Creatures Great and Small Sundays at 9:00PM on PBS, be sure to check out Miss Scarlet and The Duke at 8:00PM. The first episode gives just a hint of what’s to come for London’s first female private detective. Her father, a retired policeman and recognized private detective, taught her the basics as a young girl. Then something changed, and he told her to forget her foolish idea of being a policewoman. To learn more, and earn a place in her father’s business, she employs street boys to find dead bodies. After all, one can’t learn if she never observes a crime scene.

Set in Victorian society, it’s not safe for a woman to go out alone after dark. Chasing criminals is not even a job for a gentleman. It’s nearly a scandal for young ladies to ride “contraptions,” otherwise known as bicycles. Miss Scarlet and The Duke puts in all the sexist obstacles to prevent success. Except, like Sherlock, Scarlet is a keen observer and smarter than the men. Early on, she picks up a key investor. Scarlet is not one to be deterred. I give Miss Scarlet and The Duke an early 4.0 Gavels and it receives a solid 7.4/10 IMDb score.

Eliza Scarlet’s father is missing and she asks William Wellington aka The Duke for Scotland Yard assistance. Her father found dead and in debt, Eliza seizes the opportunity to prove that she can be a successful PI. But, she must act quickly before any clients realize he’s dead. Alfred Winters reluctantly agrees to hire her to find his estranged niece. Mistakes made put Eliza and others in danger. All the while, wealthy Rupert Parker seeks her hand in marriage, sort of. What will it take to end her folly? There are lots of dastardly men to put behind bars before some man is going to turn her head.

Miss Scarlet is Kate Phillips, a veteran of Wolf Hall, The Crown, Peaky Blinders, and Downton Abbey. Quite the resume, wouldn’t you say? In Wolf Hall, critics complained she was “too pretty” to play Jane Seymour. Of course she was, the woman’s been dead for nearly 600 years. As The Duke, Stuart Martin will always be one step behind Miss Scarlet. He’s a cast member of Jamestown and Medici: Masters of Florence. Although they got off on the wrong foot, it appears that brothel bouncer Moses, played by Ansu Kabia (World on Fire), may become an ally. Otherwise, he is one scary dude.

The Duke tells Miss Scarlet that investigating cases is a job for a man. Not one to pull punches, she replies that “yet you have been doing it all your life.” Caught in a raid on a brothel and about to be subjected to a forced venereal disease check, Miss Scarlett smartly invokes The Duke’s name. Clearly, the remembrance of a long ago kiss will bring some simmering romance between Miss Scarlet and The Duke.

“If you’ve been seeking a new Victorian crime show to binge, this is it!” IndieWire.com

“Pleasant. Mild. Benign. And yet, is that really a crime?” Paste Magazine

You don’t have to work as hard in Miss Scarlett and The Duke as in some crime thrillers. And, it appears each episode wraps up a case, unlike other shows where the cases drag on and on for an entire season. After one episode, thumbs up!