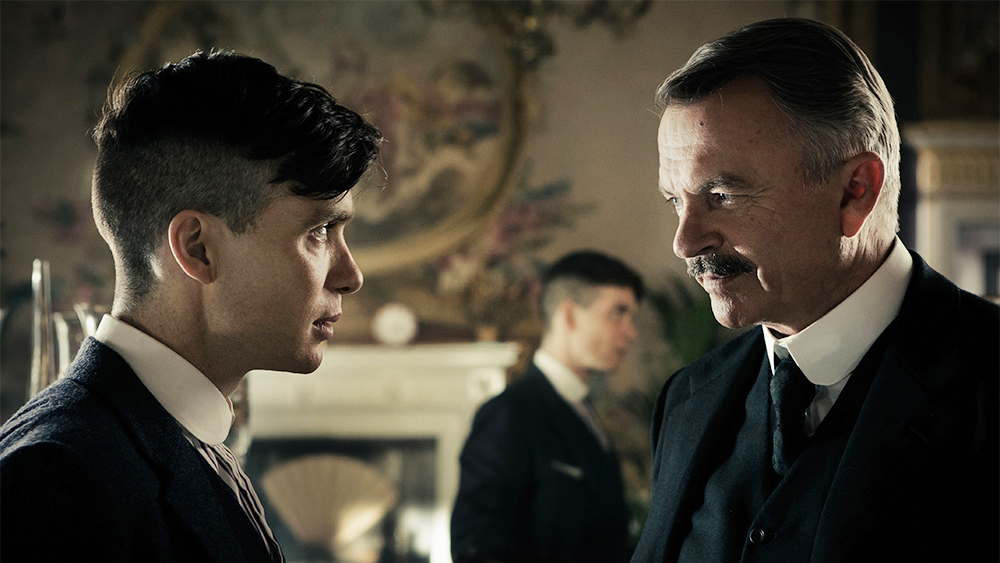 Very late to the party, I finally got around to the strangely named Peaky Blinders. Where have I been? Thomas Shelby, gang leader of the Peaky Blinders is every bit as complex a character as Nucky Thompson in Boardwalk Empire. Move the latter from Atlantic City to Birmingham, England, add three brothers and a sister, and you have the beginnings of the Shelby Empire. Of course, no gang thriller is complete without an equally compelling cop not afraid to bust heads. Chief Inspector Chester Campbell operates under the direct authority of Winston Churchill.

Like the historical figure Enoch “Nucky” Johnson, the Peaky Blinders is loosely based upon an urban street gang in Birmingham. Some suggest the name comes from a sneak attack from behind whereby you pull down the peak of the cap to blind your victim. In any case, in Season One, the fictional Shelby family seeks to control bookmaking in the area. Recently transferred from “successful” efforts to forcefully put down unrest in Dublin, the gang comes to the attention of Campbell. Still, he places them third on his priority list of worries after the IRA and the Communists. He soon finds out that Tommy Shelby is not to be underestimated. I give Peaky Blinders 4.5 Gavels and it has an 87% Rotten Tomatoes rating with a near unanimous 96% Audience score.

By chance, the Peaky Blinders find and appropriate government machine guns and ammo headed to Libya. Even though the discovery of the weapons in their possession means certain execution, Tommy ignores advice and says “they” will have to pay for them. Churchill pressures Campbell for results, and the IRA will pay handsomely for them. At war with the gypsy Lee family, the Italians looking for revenge for a murder, bookmaker kingpin Billy Kimber warily watching his every move, and spies all around, Tommy has few friends. What’s his next move?

Deservedly, Cillian Murphy (Dunkirk, Anna) won a Best Actor award for each of the first four seasons for his portrayal of Tommy Shelby. One can only guess what goes on behind those steely blue eyes. Helen McCrory won three such awards as sister, Polly Gray. Just as compelling, she ran the Peaky Blinders when the men were in France during WWI. Sam Neill (Chester Campbell) attacks those in his way like he attacked dinosaurs in Jurassic Park. Of special note is Annabelle Wallis (Grace), a barmaid with a score to settle.

Set in 1919, this Netflix offering features the violence you might expect in a gangs fighting gangs fighting cops series. Both Tommy and Chester are Machiavellian in their dealings with others. Double-crosses abound. Of additional note, Season One of Peaky Blinders ends on a cliffhanger, much better than most. Don’t you just hate that?

Time Out writes “stick with it – the cast is superb and the plot, as it shakes off a few early clichés, becomes truly absorbing.”

Or, as a barman tells Tommy just before a major gang confrontation, “we are rooting for you. You are bad men, but you are our bad men.”

That is to say, the Peaky Blinders will likely become your bad men, too.