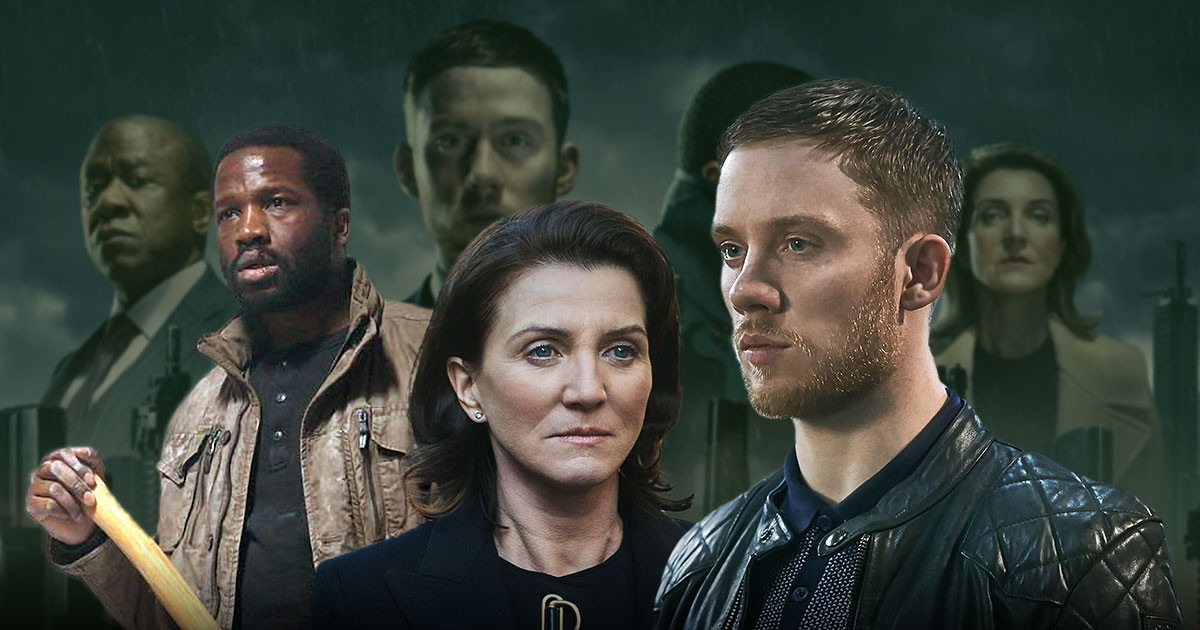 You will be hard-pressed to find a show more complex, intense, and violent than Gangs of London. Why complex? Irish, Blacks, Kurds, Pakistanis, Albanians, and Travellers form the Wallace syndicate. The intensity ramps up as the syndicate demands retribution for the killing of the patriarch, Finn Wallace. And, every time you think you’ve seen every possible way to kill a man, Gangs of London tops it, or maybe, bottoms it.

The opening scene is a prime example. Visualize a man hanging upside down by a rope tied to one leg off the side of a skyscraper. The picture at the bottom of this review will help. Now, make it nighttime. Pour gasoline on the rope and the man. Light the match. It doesn’t take too long until you have a corpse on fire falling against the backdrop of the city of London. And, that is just the start.

Sitting at 91% Rotten Tomatoes with an 8.1/10 IMDb rating, Gangs of London is killing it, in more ways than one. With an impressive cast, strong script, and great production values, there is much to like. We’ll say it’s The Godfather on steroids. Except, as in the John Wick series, enough is . . . too much. I give Gangs of London a qualified 4.0 Gavels. If you can tolerate the mayhem, you’ll likely hang around for Season Two.

“Accept that you must kill, or be killed,” Finn and Marian Wallace teach their young boys, Billy and Sean. “Some say it’s brutal. I say it’s glorious.” At his father’s death, Sean orders all criminal activity shut down until the killer is found. None of the “partners” is happy about the cash flow loss. Advisers Ed and Alex Dumani fear their friends will turn into enemies. Sean will not be persuaded to change course. Revenge must be swift, lest he be perceived weak.

A graduate of Peaky Blinders, Joe Cole (Sean Wallace) remains in the world of gangsters. A staple on British and American television, Michelle Fairley plays Marion Wallace. As the matriarch, she is no shrinking violet. Most well known as Miles O’Brien in two Star Trek series, Colm Meaney, as Finn Wallace, dies early. Rest assured Gangs of London still features him prominently.

While Gangs of London is an AMC+ ten-part series, Amazon Prime permits the first three episodes for free. Given the level of violence, I will not opt to purchase the remainder. This one is a little over-the-top. Thus, the “qualified” rating.

ABC Australia boasts “not for the faint hearted, Gangs of London is tough as nails and addictive as hell.” Tell-Tale TV gives a thumbs-up with “Gangs of London‘s family drama, constantly changing motivations, and overall mystery make it a solid choice to fill the Succession or Game of Thrones-sized hole in your TV schedule.”

Whatever they paid the fight choreographer for Gangs of London, he earned every penny. Still, the captive bolt pistol (used to kill cows in a slaughterhouse) delivered to the head of a human was the final straw.