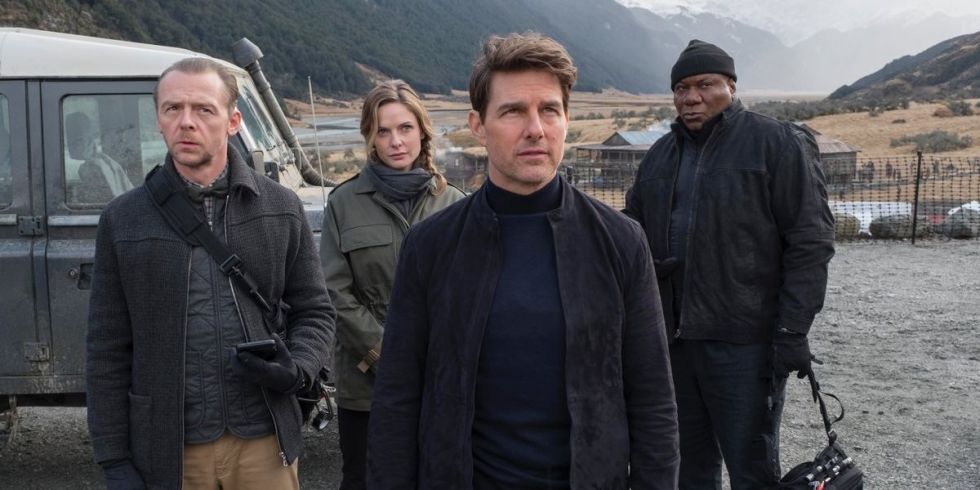 The Mission Impossible series just does feints, double-crosses, stunts, action, suspense, and love better than everyone else.  After nearly 2.5 hours, you leave the theater wanting more.  For those of you angry with the “force” of Star Wars, come see the Mission Impossible Force.   You won’t be disappointed.  They retain just enough of the MI trademarks, then add impossible stunts.  That Tom Cruise does most of his own stunts gives an added thrill.  One can’t help wonder if he has a death wish.  Or, in this case, at least a broken ankle wish.  For pure entertainment, I give this 5 Gavels.  Rotten Tomatoes is nearly unanimous with a 98% rating.   It seems nearly impossible for critics to be in such agreement for the sixth in a series.

The Apostles, led by John Lark, have obtained three nuclear devices.  Ethan Hunt feels responsible as his choices were either the loss of the plutonium or the loss of team members.   The IMF, now distrusted by the CIA, is forced to accept August Walker to the team.   They head to Paris to intercept Lark and The White Widow, an arms dealer.  But she wants anarchist mastermind Solomon Lane and former MI6 agent Ilsa Faust as part of any deal.  The problem is that anyone could be John Lark.  Trust no one. Tom Cruise is Ethan Hunt.  I pity anyone who tries to take over this role.  Skyscraper was a nice action movie but Tom’s stunt-work makes The Rock’s stunts look so phony.  Ving Rhames as Luther and Simon Pegg as Benji provide the necessary comic relief.   Rebecca Ferguson, as Ilsa, gives as good as she gets, completely believable as Ethan’s love interest.  Michelle Monaghan, Ethan’s ex-wife, now has formidable competition.  Henry Cavill is August Walker, a CIA assassin.  If you go rogue, he will kill you, “nothing personal.”   Sean Harris repeats his role as Soloman Lane.  You look into his eyes and see evil.

In 2015, Rogue Nation did $195 million in the US with a worldwide total of $682 million.  Globally, Fallout projects to earn $135 million this weekend.  The budget for this movie is $178 million, not bad considering a two month layoff to heal the ankle.   Reportedly, the layoff cost $80 million but insurance helps the bottom line.  Sky dives, motorcycle chases, helicopter crashes, and cliff hanging are just some of the crazy scenes.   Don’t get me wrong, Fallout has a fine story, too.  For example, we find out a bit more about Julia Meade-Hunt.   For those more knowledgeable than I, the music fits the action quite well.   All in all, this is quite the enjoyable movie.  This is one I would like to see again. I couldn’t resist this picture given Cruise’s insistence on doing his own stunts.  Please censor for those of an inappropriate age.  Tom Cruise planned on being a priest at age 15.  Likely, the seminary did not approve the message on the T-shirt.