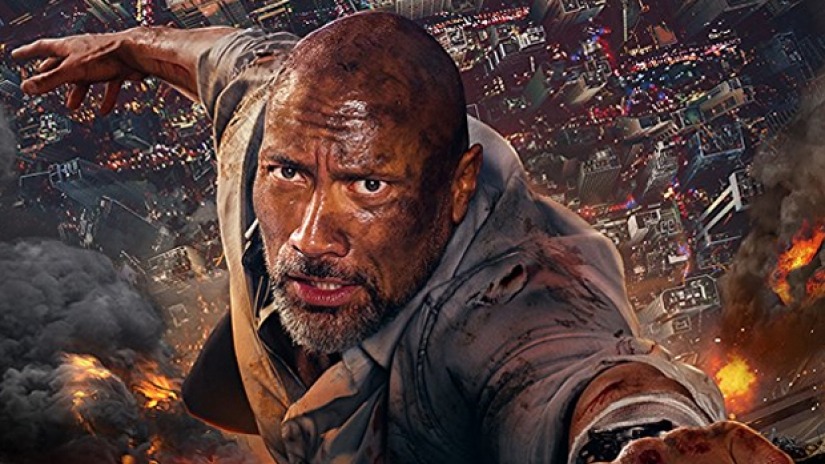 If you like non-stop action, The Rock delivers, again.  But, if you have  a fear of heights, you may want to skip this one.  At a short 102 minutes, there is not a lot of time for in-depth dialogue and character development.  The scenes outside the Dubai Burj Khalifa were spectacular in Mission: Impossible-Ghost Protocol.  Given that The Pearl clips are filmed in the dark with computer graphics, they don’t quite measure up to Tom Cruise‘s standards. Yet your acrophobia may still act up a bit.  Experts predict Skyscraper will make $32-$40 million in the US this weekend.  Filmed in Hong Kong, I would expect it to “catch fire” in China.  I give Skyscraper 3.5 Gavels and it has a 51% Rotten Tomatoes score.

Will Sawyer is in Hong Kong as a security assessor, years after a hostage-rescue-gone-wrong episode took one leg.  As he finalizes his report, terrorists set up Will to take the fall for a fire in The Pearl.  Trapped above the fire is his family.  With the police on his tail, and terrorists in control of all systems, he must re-gain entrance to the building.  The owner, Zhao Long Ji, is on the top floor and sees no reason to leave.  Just what is it that the terrorists want?

Dwayne Johnson is Will Sawyer.  It is a shame that the script did not allow him to give a Bruce Willis/Die Hard-type performance.  Like Will Smith before him, he can still pull off the summer hit.  If you expected Neve Campbell to be window dressing, she will surprise you.  Welcome back, Neve.  Pablo Schreiber is Ben, a friend who helps Sawyer get the security job. Due to a plot device, he doesn’t get much screen time.  Chin Han as Mr. Ji and Roland Moller as Kores Botha (the leader of the terrorists), both needed more backstory.

For those critics who say you have to suspend belief to watch this movie, the same can be said of most all action movies.  Similarly, for those who say it is just “dumb summer fun, I say “precisely.”  Much like Rampage which cost $120 million and made $425 million, this is what Dwayne Johnson does.  Lo and behold, this one cost $125 million and will likely earn an equal amount.  These are not Oscar winners and, individually, are not billion dollar blockbusters.  Taken together, they will make close to a billion dollars.   And that is why The Rock makes the big bucks!  So, get yourself some popcorn, sit back and watch super-human fingers and duct tape save the day.  For those with acrophobia, I suggest cover one eye.