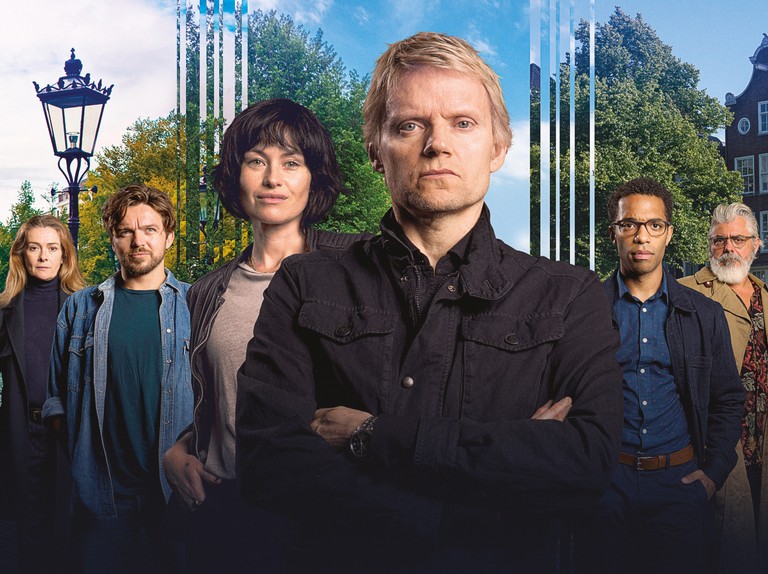 Is it odd that Van der Valk, a show about a detective in Amsterdam, is written by a Brit and the stars are all British? Maybe, but this Masterpiece Theater program, available through Amazon prime, is a hit. Originally shown in England over five years from 1972 to 1992, this Van der Velk is a reboot of the first novel by Nicolas Freeling entitled Love in Amsterdam. Over six episodes, approximately 45 minutes per, Piet Van der Valk and team solve multiple murders in each of three cases.

Amsterdam is another lovely European city and Van der Valk does it justice. Piet is a prickly, secretive, lead detective with lots of history. Coroners in TV series tend to be an unconventional lot, but I’m not sure we’ve ever met one quite like Hendrik Davie. Job Clooves, the unwanted new guy, is brilliant with stats and fashion. Will he ever earn praise from Piet? Overall, these crime stories are well-done, the first story with a very clever twist at the end. I give Van der Valk 4.0 Gavels and it receives a 77% Rotten Tomatoes rating with a 6.5 IMDb score.

Someone dumps two dead bodies in Amsterdam. One worked closely on a political campaign against a right-wing candidate, de Klerk. Notably his parents were in the inner circle of de Klerk. Then, his friend also disappears. Pressure is on Van der Valk to tread carefully.

In the second case, a Muslim female and a nun share an interest in religious erotica. When one ends up dead, there are no shortages of suspects. Finally, in case three, a vlogger of ethics in fashion is murdered. In addition, a corrupt officer put in prison by Piet, and his boss, is up for parole. Revenge rears its ugly head!

Marc Warren plays the cynical Piet Van der Valk. Clearly “wounded” by the loss of the love of his life, he has little time for nonsense. Maimie McCoy, his second in command as Lucienne, has his back, and he has hers. You’ve seen Mamie in Grantchester, Endeavor, and DCI Banks.

Van der Valk is a typical crime drama series, unlike Manhunt which is based on actual events. So, Piet can say “I think all politicians should be shot” without fear of getting the pink slip. The relationship of Piet with his boss, Julia, and subordinate, Lucienne, is somewhat unusual. The closeness borders on the sexual, but never crosses the line. Discovering their history is just part of the fun.

The Wall Street Journal seems infatuated claiming “sex is ultimately behind everything. Love is elusive. The plotlines are serpentine. Following them is a fine way of spending part of one’s Sunday night.” Reason Online adds “Van der Valk is a pure, hard-boiled throwback to the days of Mickey Spillane and Jim Thompson.” Rated PG-13, this is not an Amsterdam sex and drugs show. Rather, it’s just another fine series from a line of fine programs from Masterpiece Theater.