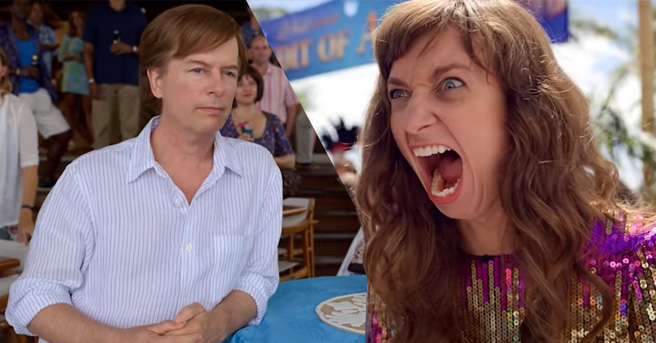 I checked the filmography of David Spade just to make sure. Yep, he has never been in a movie that I liked. The streak continues. It is difficult to make movies worse than The Disaster Artist, The Beach Bum, The Art of Self-Defense, and Love Wedding Repeat, but The Wrong Missy bottoms them all. Gross, obnoxious, and unsavory are some of the adjectives that come to mind. A portion of The Wrong Missy takes place in Hawaii, but that is offset by the part that takes place in the Newark airport. Everything that is right about comedy in Jerry Seinfeld: 23 Hours to Kill is turned on its head. Crassness for the sake of crassness is not funny. Save yourself ninety minutes of sheer revulsion and skip this Netflix offering. I give The Wrong Missy the correct score of minus 1.0 Gavel, the lowest score ever.

Tim Morris bumps into his soulmate on way to boarding a plane. Everything about her is perfect. Spurred on by a co-worker, he invites Missy to a corporate retreat in Hawaii. On the plane, he discovers that the Missy he invited is a previous “date from hell.” His promotion to President of Sales is in jeopardy. The Barracuda is about to eat his lunch!

David Spade is Tim Morris and he has no shame. Lauren Lapkus (The Big Bang Theory) is a fine physical comedienne, but the material given to her as The Wrong Missy is just deplorable. She deserves better. Molly Sims, better known as a model, is the right Missy, but she is stiff, real stiff.

With only two reviews thus far, here is the one that sums it up the best. “The Wrong Missy may be one of Netflix’s worst comedies yet, and we’re really, really not just saying that to get you to watch it out of curiosity.” Predictably, the hero falls for the “correct” Missy eventually, but only because she hypnotizes his boss into loving him and hating his competition, The Barracuda. That is what passes for wisdom in this inane film. Avoid The Wrong Missy at all costs unless you wish to take at least five points off your I.Q. It is a real miss, as well as a real mess.