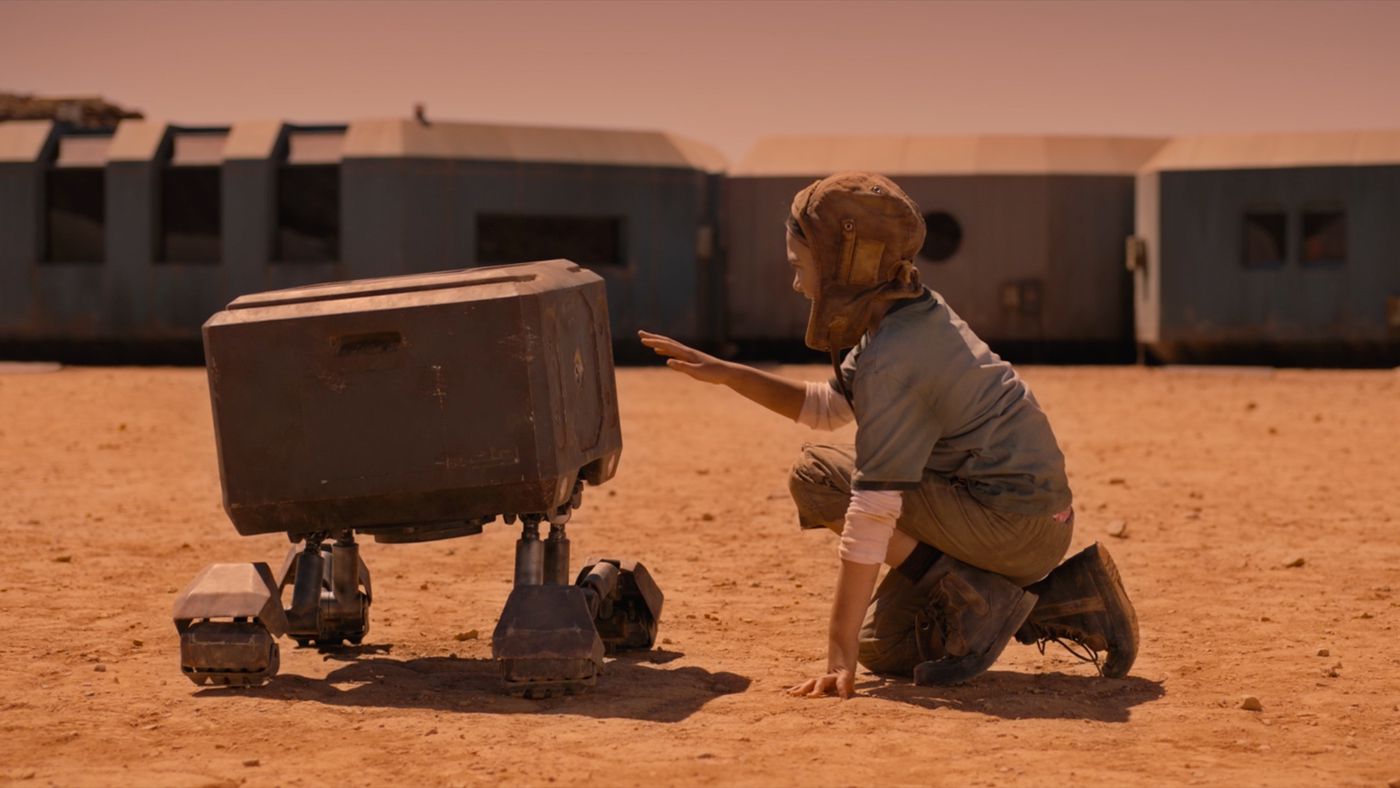 “Mankind’s earliest Settlers on the Martian frontier do what they must to survive the cosmic elements and each other.” That’s the billing but a misrepresentation of the highest sort. Well, they are on Mars although the set looks more Northern Cape of South Africa where it was shot. Some publications refer to Settlers as a Space Western. They breathe and wear no spacesuits. Plants and animals seem to thrive. How does this happen on Mars? Eventually, we are told that there is a force field to protect them. Where is everybody? That is the mystery, never answered.

In a film with very few characters, Settlers focuses on young Remmy and her family. Although no one is in view, someone wants them to LEAVE. Reza and Ilsa scour the landscape, rifle and machete in hand. Divided into three chapters, your fate will be decided if your name appears in the title. Yet, we know little about you. Told that you crashed and were taken in, why did your host want to kill you because you were from Earth? What happened to the great cities and settlements? What remains outside? Settlers gives a brief snapshot of one family in time, with no before or after. It’s as if someone said, let’s write a story with no beginning and no ending. Very unsatisfying, I give Settlers 2.0 Gavels and it receives a 53% Rotten Tomatoes rating with a poor 4.7/10 IMDb score.

The attack on the compound is swift and brutal. Several dead, Reza chases after a survivor. Only Jerry returns, declaring “this place doesn’t belong to you. It belonged to my parents. I’m here to take it back.” Ilsa faces a choice. Does she leave with her daughter, Remmy, to a barren and hostile outside? Or, does she stay with this man who just killed her husband? He promises to protect her with the caveat that, after thirty days, he will place his gun on the table and turn his back. Does survival mean she must learn to trust this intruder? Even if she can forgive, can Remmy? More basic, what about the survival of the species?

While the most memorable character of Settlers is Steve the Robot, you will immediately recognize Brooklynn Prince as young Remmy. Not only did she win multiple awards for her performance in The Florida Project, she starred as the young detective Hilde Lisko in the delightful Home Before Dark. Seen in Atomic Blonde and in The Kingsman movies, Sofia Boutella acts as Ilsa, a fiercely protective mother with few good options. Ismael Cruz Cordova (Miss Bala, Mary Queen of Scots) plays the enigmatic Jerry. Just what does he want?

As time passes, young Remmy grows into older Remmy (Nell Tiger Free), still traumatized and suspicious due to prior events. Now raised solely by Jerry, is he guardian or groomer? To what lengths will Jerry go to prevent her from leaving? Remmy faces the same dilemma as her mother. How will she respond?

“Ultimately, though, Settlers is more about setting a mood and painting a picture of hopelessness than explaining what happened before the story…it feels incomplete.” Chicago Sun-Times

“Settlers is so bare in world-building details that its characters float untethered, and a major mid-film reveal seems like a narrative shortcut.” Polygon

Find Settlers on Hulu at the risk to your mental health. Apparently, Mars is even bleaker than we thought.