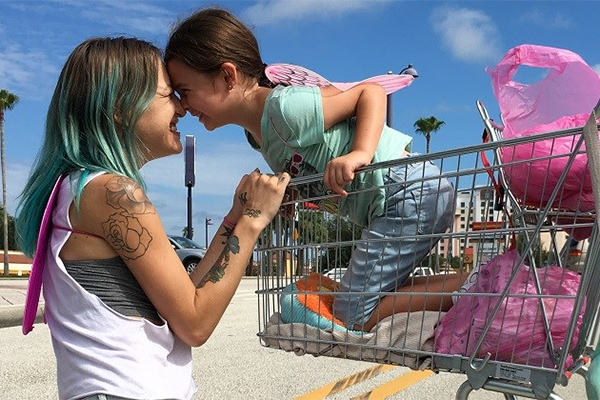 For all the hype about The Florida Project, let’s say I am underwhelmed. Maybe it’s opposite week. I like Artemis Fowl, the critics not so much. The critics like The Florida Project. But for this review, I saw enough after 27 minutes, and it gets no better. Billed as a “humanist” story about the “innocence of youth,” I see cursing six-year olds with no supervision burning down abandoned condos. Just because a film may accurately portray real life doesn’t make it worthwhile. If you want to see a mother resorting to prostitution and theft to support her child, this is your vehicle. No surprises here. You know residents of The Florida Project are not headed to Disney World. I give the movie 1.0 Gavel and it receives a glowing 96% Rotten Tomatoes rating with a still respectable 80% Audience score.

Moonee, Scooty, and Jancey, all age six, run wild at the Magic Castle Motel. From time to time, Bobby, the hotel manager, makes an attempt at supervision, with varying degrees of success. Raised by single mothers, or grandmothers, there is little for the kids to do except get into mischief. Spitting contests, burping contests, and hitting up tourists for ice cream money fill their days. Eventually, lines are crossed which have consequences for Moonee and her mother.

Before starring in Home Before Dark, Brooklyn Prince receives The Critics’ Choice Award for Best Young Performer as Moonee. Willem Dafoe (Aquaman) is a fine actor, here as Bobby. In my opinion, the role did not have enough substance for him to deserve an Oscar nomination for Best Supporting Actor. Though you may pity or despise her character, Bria Vinaite is the best of the three as the “irresponsible” mother. It is her performance that will give you a visceral reaction.

In the FYI category, The Florida Project is the original name for Disney World. Also, Ms. Vinaite sells marijuana-themed bikinis and baseball caps under the ChroniCal Designs brand. While the ending of the film makes absolutely no sense, the director tells us to “get into the mind of Moonee” and imagine a happy ending. Richard Roeper describes The Florida Project as “it’s a film that’ll make you wince at times, and you’ll most likely not want to see twice, but seeing it once is an experience you’ll not soon forget.” Rex Reed adds that “the impression is a disturbing film of energy and compassion that left me with an inescapable sadness, from which director Baker offers no way out.” Wincing and sadness, it is, folks. I recommend you look elsewhere for your entertainment.