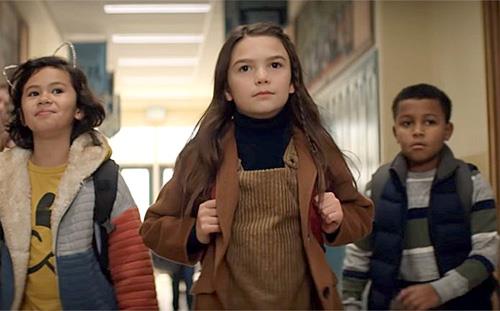 Probably all you need to know is that Home Before Dark came HIGHLY RECOMMENDED by my 11 year old granddaughter. In The Mire, I noted the paranoia in All The President’s Men. Now, visualize a nine year old reporter with a Young Sheldon type intensity and a Sherlock type memory. I present to you, Hilde Lisko. Apple TV+ tells us she is inspired by Hilde Lysiak who, at age 12, gave a commencement speech to West Virginia University’s Reed College of Media.

Lysiak and her father, also a journalist, wrote six books under the title Hilde Cracks the Case. As you might expect, Lisko and Lysiak share many of the same experiences, starting a newspaper, reporting a murder, and being dismissed and bullied. From that beginning, Hilde Lisko takes on corruption in the Erie Harbor Sheriff’s Office to re-open a 31 year old kidnapping-murder case. I give Home Before Dark 3.5 Gavels and it receives an 81% Rotten Tomatoes rating with a 94% Audience score.

Hilde Lisko watched All The President’s Men 36 times and read the book 13 times. Some might call her obsessed, others say she is annoying. Just relocated back to her father’s hometown, Hilde meets Penny Gillis, sister to the man convicted of the kidnap-murder of Richie Fife 31 years earlier. Within 24 hours, Penny is dead and the Sheriff concludes it is an accident. Hilde believes otherwise and The Magic Hour Chronicle is born. Her reporting opens old wounds. Hilde would say that such is the price of truth.

Besides Home Before Dark, Brooklynn Prince (Hilde) already appears in seven movies (The Florida Project, Lego Movie 2) and has a Critics Choice Best Young Performer award to her credit. Her sister, Izzy, is a much more well-rounded character, dealing with cliques, a new boyfriend, social media attacks, embarrassing parents, all the while “obligated” protect her bothersome sister. Played by 16 year old Kylie Rogers, she is a veteran of 17 movies and 11 TV shows. Their parents are the miscast Jim Sturgess and the well-cast Abby Miller (The Sinner). Memo to Mr. Lysiak-write yourself a better part.

Filmed in Vancouver, one gets some gorgeous seaside views. As a message of girl empowerment, you can hardly do better than Home Before Dark. It is the “girls” who really step up to find the truth. My prime complaint of the series are two-fold. First, the series has too much filler; seven episodes would be enough, five even better. Second, the ending is too contrived, just too obvious to set up a hoped-for Season Two.

As one critic writes “Home Before Dark doesn’t seem to know who it’s for: it’s a little morose for kids and far too Disney Channel sweet for older teens and adults, and these two tones constantly bash against one another as the mystery unravels.” Another comments that “at her best, Hilde embodies the wit, precociousness and probity of Lisa Simpson; at her worst, she resembles Claire Danes‘ exhaustingly intractable and petulant CIA agent Carrie Mathison in Homeland.” Either way, those are two pretty darn good entertainers. As you can see, I didn’t love this as much as my granddaughter, but I can clearly see why she wanted to binge watch it. If only her dad had let her. Lily, you have a good eye. Keep those recommendations coming!