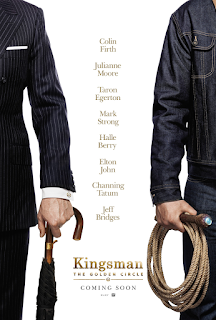 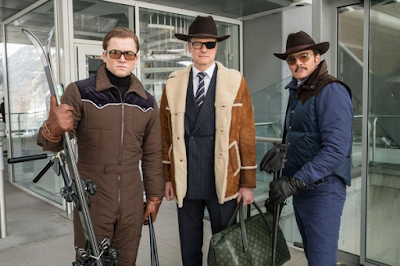 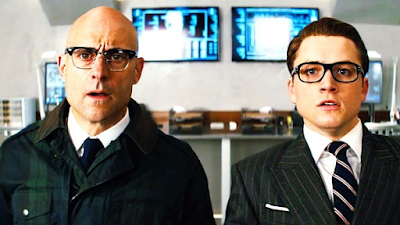 Wild, wacky, over-the-top, profane, crazy, fun, and a worthy successor to Kingsman I.  This is definitely not a movie for everyone, but if you liked Kingsman I, you will like this one as well.  At all times the actors realize this is a spoof, and appear to be having a great time; the audience feeds on that.  From the opening action scene to the end, the stunts keep coming.  There is even a reprise of the “teaching manners” scene in a bar.  The director knows what works and he doesn’t skimp.  This is never going to be a James Bond franchise, but I can see it carrying on for awhile.

Set one year after the original, a rejected Kingsman applicant joins forces with a drug lord and wipes out nearly all the remaining Kingsmen.  Eggsy and Merlin must find help, in Kentucky of all places, with their previously unknown American cousins, the Statesmen.  Poppy Adams, the female drug queen, has placed a virus in illicit drugs which will kill all users unless her demands are met. Champagne, Whisky, Tequila, and Ginger Ale are the key players in a multi-billion dollar booze operation that is the front for the Statesmen.  They agree to provide their vast resources to assist Eggsy and Merlin save the world once again.  This includes saving Eggsy’s girlfriend, Princess Tilde, who we met at the end of  Kingsman I.

Taron Egerton is again Eggsy and Mark Strong is very good as Merlin.  We find out that Merlin likes John Denver songs.  The movie does a great job tying in Kingsman I, reminding the audience what happened to Galahad (Colin Firth) and establishing the “father-son” connection with Eggsy.  The scene stealer in the movie is Julianne Moore, who was a delightful pick as Poppy Adams.  She clearly enjoys being the wicked queen of drugs.  Jeff Bridges and Channing Tatum are underutilized as Champ (short for Champagne) and Tequila.  Pedro Pascal as Whiskey looks and acts so much like a young Burt Reynolds that you almost think it’s a computer trick.  Halle Berry is Ginger Ale, the counterpart to Merlin for the Americans.  Finally, Elton John plays himself and has been kidnapped by Poppy.  Even Elton is in on the parody, the parody of himself.

Kingsman 2 is full of itself, as you can see by the sheer number of actors that it tries to shoehorn in. At two hours and 21 minutes, it is 21 minutes too long.  But, I give it credit for taking time to give us more backstory rather than giving us gaps.  Overall, the action makes up for the “amnesia” scenes. Don’t miss the “mountain” mission scene, implausible but still very entertaining.  This is not a must-see movie that you have to get off the couch and rush to the theater.  Rather, it is another sit back and relax and wonder how these crazy writers come up with this stuff.  Robotic arms and robot guard dogs are not new, but are used effectively here. With gadgets galore, you get your moneys worth.