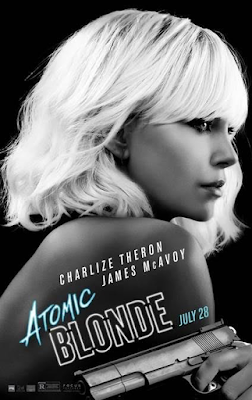 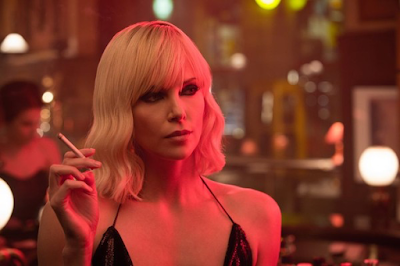 Bond.  Jane Bond.  No, not really.  Wick.  Jane Wick.  Not John Wick either.  Lorraine Broughton is her own character and it is to the director’s credit that he didn’t try to replicate some existing character.  Lorraine can dress well but still deliver some of the better close-quarter fighting action that the movies can deliver.  She is sexy and she is tough.  The stairwell scene is well choreographed.

The Berlin Wall is about to crumble but an MI6 agent has been killed.  The agent possessed intelligence information sought by the Brits, the Russians, the French and the Americans.  That info is missing and Broughton is sent to East Berlin to retrieve it.  She is told to “trust no one” but is given David Percival as her contact.  From the beginning, things go wrong.  Days later, she is being interrogated by her superiors and the CIA to find out what happened.  The movie unfolds as she is telling her story, bruises on her body still quite apparent.

It is hard to imagine anyone else playing the lead role other than Charlize Theron.  I agree with the critic who says she can start a franchise if she wants.  James McAvoy as Percival appears slimy enough to be able to pass in the underworld of East Berlin.  Toby Jones is Lorraine’s supervisor and you will recognize his face immediately.  John Goodman is the CIA representative and, if this franchise continues, appears to be set for a much bigger role.  Sofia Boutella, fresh off her role as the evil princess in The Mummy, stars as the French agent.  You are likely to hear about the bedroom scenes of Charlize and Sofia.

James Bond movies are colorful and in beautiful exotic places.  This movie is filmed in areas of East Berlin that you wouldn’t want to frequent and in a film noir fashion.  Although it’s a spy movie, it certainly has the elements of crime, sex, and cynical attitudes.  Those critics who didn’t like the movie seem to focus on the complicated plot.  For me, such was not only expected, but demanded, when you have agents, double agents, and triple agents.  If you go expecting a James Bond movie, you will be disappointed.  With Bond, you usually know who the bad guy is early in the movie. Here, the director makes you work for it.  Overall, just watching the artistry of Charlize Theron is worth the price of admission.  A solid first offering for Lorraine Broughton; it will be interesting to see if this goes nuclear.