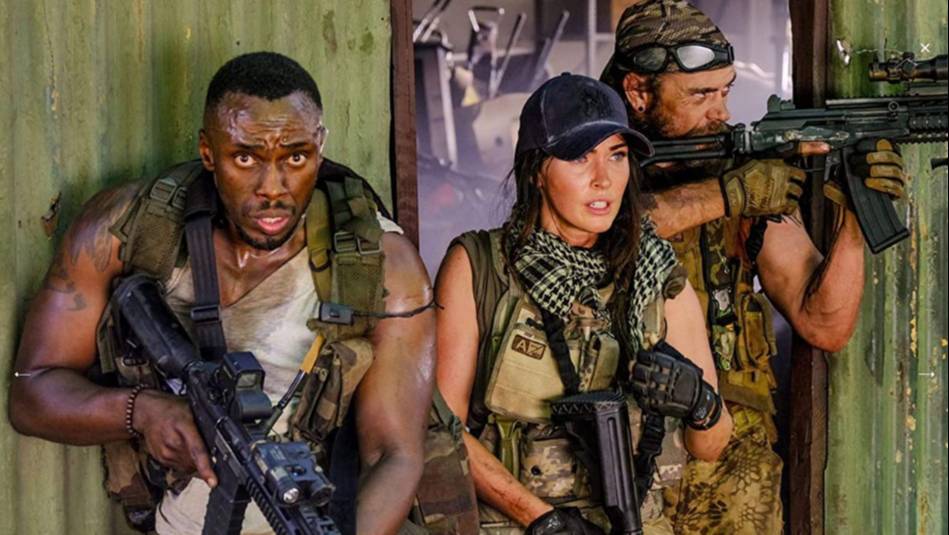 In Rogue, Megan Fox gets another chance to prove that she belongs in the upper tier of actors. She fails, miserably. To be certain, the film that doesn’t know what it wants to be does her no favors. Yet, she fails to command the screen as does Angelina Jolie (Those Who Wish Me Dead) or Charlize Theron (Atomic Blonde) or Margot Robbie (Birds of Prey). Every leader in an action film gets tested. That’s especially standard fare for a female lead. No different in Rogue for Samantha O’Hara. Ultimately, one of the few survivors while accomplishing her mission, Megan Fox never quite pulls off that she is in command.

As for Rogue, is it a film about Al-Shabaab, terrorists who kidnap schoolgirls? Could it be about the little known practice of “lion farms” in South Africa, harvesting parts of lions for sale to the Far East? Maybe it’s a horror film about crazed lions attacking humans in the dark. You might add in a little government corruption. Or, is this a film about mercenaries trying to rescue one of the aforesaid schoolgirls? When you try to be a little about everything, you get a lot of nothing. Clearly, a 70% Rotten Tomatoes rating lured me in for this 105 minute film found on Hulu. It’s own 19% Audience score gives a hint that all is not well in this Rogue operation. I give the film 2.5 Gavels and it receives a poor 4/10 IMDb score.

Hired by the governor to rescue his daughter, O’Hara and company rely on the intelligence provided by a former Al-Shabaab member, Pata. It turns out that the compound holds three girls, not one, in a different building than advised, protected by many more than expected. (Ed. note: All pretty standard stuff for an action film.) As they make their way to the point of exfiltration, the rescue helicopter gets shot down and their Plan B exit is blocked by a cliff. Can they survive the night in an area full of terrorists and wild animals?

Pata, a Massai, lets everyone know that “the females are the true killers.” In an award for the worst CGI in recent memory, the lioness gets a special notice. She looks more pit bull than lion. Megan Fox‘s most memorable line may be “which bitch is going to kill you first?” The only other actor of note is Philip Winchester as O’Hara’s first lieutenant. His claim to fame is that he appeared in Chicago P.D., Chicago Justice, and Chicago Med, all in the same year (2017). If you are interested, no, I didn’t watch any of those shows.

Rogue has beaucoup action in the first 15 minutes. Still, I wonder how combatants with automatic weapons can’t hit anything when less than 10 yards apart. Early on, Fox acts like the gun is a foreign object. Less than a movie-hour later, she kills with the precision of John Wick.

“Rogue should proudly occupy so-bad-it’s-good territory, but aside from a lion sprung to life on what looks like PlayStation 2 hardware, there’s nothing fun or entertaining about this grossly incompetent Predator knock-off.” Ready Steady Cut

“Rogue is an animal attack movie – think Predator on the plains, or Alien with a lion – but without the budget, shrewd characterization, or proficient effects work to get the job done right.” South China Morning Post

To its credit, Rogue shines light on 12,000 lions raised on farms in South Africa. Operators place cubs in petting zoos until they get too big, then slaughter them to supply traditional medicine markets or use them for “canned hunting.” Like the film, it’s all rather barbaric.