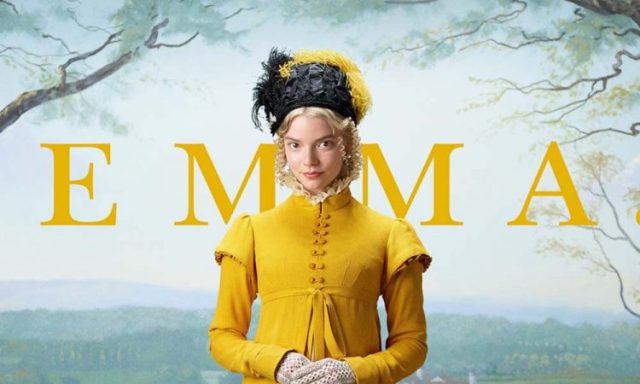 Doesn’t it seem like we just saw The Jane Austen Book Club? Actually, that was way back in 2007. Anyway, here we go again, this time with Emma. No one does period pieces better than the Brits. If you like costumes, paintings, sculptures, furnishings, food, and scenery, this is your vehicle. Generally, I prefer my British whisperings, asides, and innuendoes with English subtitles. Critics just eat up this “class status” material, but doesn’t it seem repetitive? Nevertheless, this is a classic and, if this is her first film as a director, Autumn de Wilde did herself proud. “Sumptious” is a word not often used but very apt here. I give Emma 3 Gavels and it receives an 85% Rotten Tomatoes rating with a 73% Audience score.

Twenty year old Emma fancies herself as a matchmaker. Despite warnings, she inserts herself into the love lives of others, consequences be damned. Clearly class conscious, she deems her orphan friend, Harriet, much too good for a local farmer. Not all appreciate her “help.” And, what about her own love life?

Anya Taylor-Joy, just off her performance in Playmobil: The Movie, is our heroine Emma. Naturally beautiful anyway, she does an exceptional job allowing the camera to watch her scheme. Johnny Flynn (soon to portray David Bowie in Stardust — See Thursday Morning Coffee – 9/5/19) does his best to try to rein in Miss Woodhouse, but to little avail. Yet again, Ms. de Wilde does a nice job capturing their clear physical attraction. Bill Nighy is Emma’s father, but has a very small role despite his billing.

Written in 1815, it appears the public thinks matters of the heart are not much different 200 years later. The critic for Salon.com says this is “the first great teen comedy.” The general consensus is that Jane Austen readers will love the film. For us non-readers of Austen, maybe not so much. Perhaps Emma is good counter-programming to Onward and The Way Back, but Tom Holland, Chris Pratt, and Ben Affleck present tough competition. Recommendation–Unless you are hard-core Jane Austen fans, wait for this one to be streamed and turn on the subtitles.