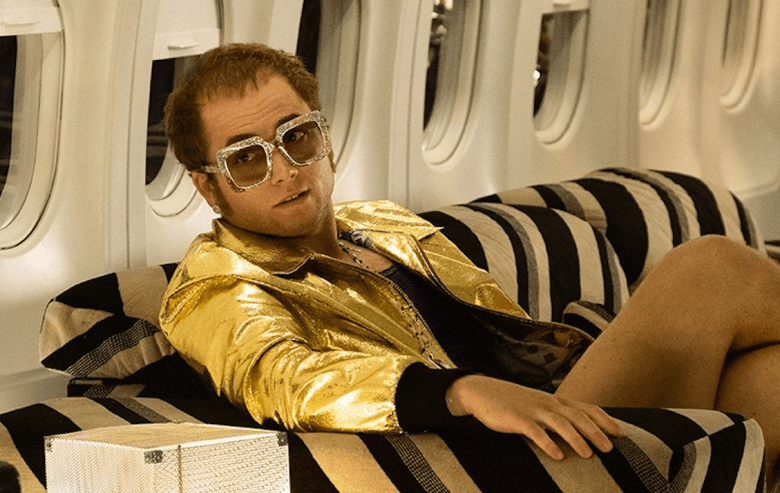 Does Rocketman get off the launch pad? It certainly does, but in ways you may not expect. Filmed in a manner easily convertible to a Broadway musical, the director allows Elton John to tell his life’s story in an addiction chairs-in-a- circle confession. In the flashbacks, which include song and dance, you see the unvarnished facts. You will be amazed that he lived past 35. While Bohemian Rhapsody told the story of Freddie Mercury, Rocketman is the existence of Elton. Taron Egerton is not the singer, but he does inhabit the character. I give this movie 4 Gavels and it receives a 90% Rotten Tomatoes rating and a 95% Audience score.

Ignored by his unaffectionate father, tolerated by his mother, Reginald Dwight is not a happy child. Thankfully, his grandmother recognizes that he can play piano by ear. After four years on scholarship to the Royal Academy of Music, Elton’s band plays back-up for a number of American groups. When he asks how to make it big, he is told to write songs. Since Elton only composes the music, he is paired with Bernie Taupin to write the lyrics. And they are off like a rocket!

Taron Egerton is Elton John. I repeat, Taron Egerton is Elton John. Like any artist, he turns it on and off in a split second. Jamie Bell, who played Abraham Woodhull in Washington’s Spies, is best friend, Bernie Taupin. Richard Madden, Robb Stark in Game of Thrones, is the underhanded and conniving agent, John Reid. Bryce Dallas Howard is almost unrecognizable as Elton’s mother.

Had Rocketman not concentrated so much on Elton’s addictions, and given us a little more music, I would award 4.5 Gavels. But, had it done so, we likely would have less understanding of how Elton John got to his current state. There are numerous articles about the accuracy of the movie (here is one in Slate magazine), but it appears to be on target. Made on a budget of $40 million, it expects to earn $20-$28 million this weekend in the US. The auditorium was nearly full in the large AMC Dolby theater at West Chester, if that is any indication. Will it beat Bohemian Rhapsody‘s overall earning of $903 Million? For comparison, that one projected to have the same first weekend earnings, but actually pulled in $51 million. Since Rocketman is a different kind of movie, I think it doubtful. Nevertheless, it is a fun ride!