July 13, 1985, knowing he was dying of AIDS, Freddie Mercury and Queen put on a concert for the ages at LiveAid.   We are fortunate to see a terrific version at the end of Bohemian Rhapsody. Those twenty minutes alone are worth the price of admission.  Knowing little about Queen, I am a blank slate entering the theater.  Unlike the judgmental critics, I have no preconceived ideas.  The beginning is a little choppy, but like the music of Queen, it takes off.  I give it 4 Gavels, and while it receives a 59% Rotten Tomatoes rating, the Audience rating is 94%.

What do you get when you mix a dentist, an electrical engineer, and a physicist with a flamboyant entertainer?  What do you call a band that refuses the record label’s demand for more of the same?  What band demands that its audience be part of the performance?  Queen!

Rami Malek as Freddie Mercury is mercurial.  Even the critics who care little for the film think he gives an Oscar-worthy performance.  Lucy Boynton plays his girlfriend Mary, the only person who understands him.  Mike Myers has a small part as an EMI executive who doesn’t get him.  Aiden Gillen from the Game of Thrones is Queen’s manager. 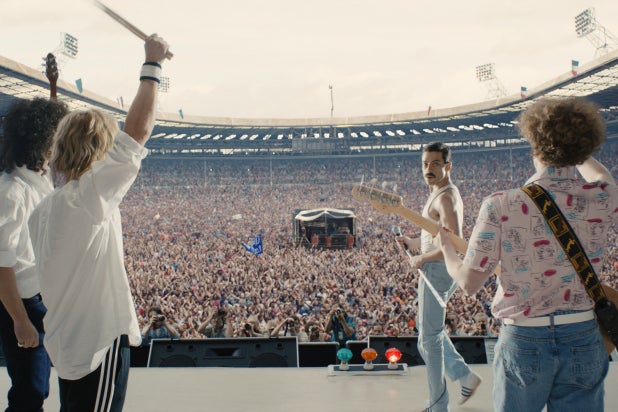 Originally projected to make less than $30 million this weekend, that is now upped to nearly $40 million.  I expect word of mouth to be strong.  The audience remained for the “credits” music in the showing I attended.  Is it revisionist history?  I don’t know, and in this case, I don’t care.  We go to a concert to see a performer.  Freddie Mercury understood that; so does Rami Malek.  Consider me entertained.