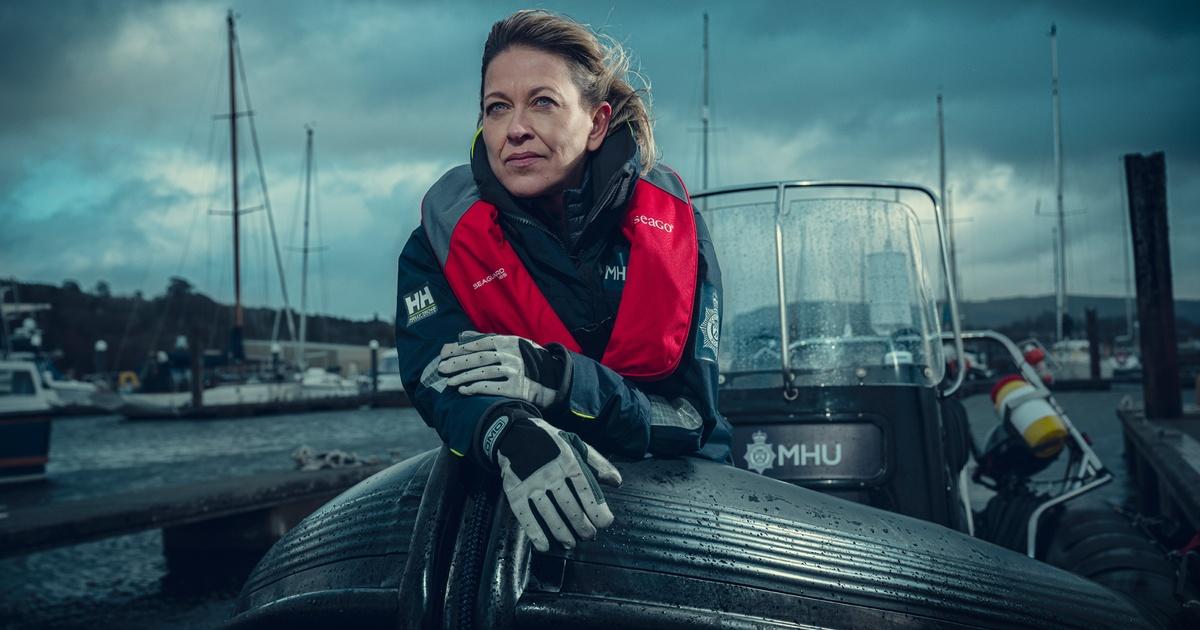 For those admirers of Nicola Walker, Annika is a treat not to be missed. Brought to you by Masterpiece available through Amazon Prime, this six episode series takes you to Glasgow, Scotland. The bottom three pictures give you a sample of the gorgeous photography, yet they do not do it justice. As in Unforgotten, Ms. Walker is again a detective, this time of Norwegian birth, assigned to the Scotland Police Marine Homicide Unit. These are not the usual, run-of-the-mill homicides nor action scenes. In the first episode, the victim has a harpoon through his head, and a detective is held hostage by a bow and arrow.

Since Annika is based upon a BBC radio series, her character often talks directly into the camera explaining her thoughts to the viewer. At first this seems odd; later, the viewer finds it helpful, almost endearing. And, to add to her responsibilities, Annika is a single mom tasked with raising a teenage daughter. Morgan is not happy to be in Glasgow, “taken in a crappy boat, to a crappy school, to be in a crappy play.” Although we did not meet him in episode one, therapist Dr. Jake Strathearn gets prime billing and the trailer confirms he plays a major part. Come for the crime and stay for the mom/teen drama. In any case, I give Annika 4.0 Gavels and it receives a 6.9/10 IMDb score.

Rather than attend a leadership course, DI Annika Strandhed takes a quick holiday to Spain. Returning to Glasgow to a gruesome murder, she regrets that decision, meeting for the first time her newly-formed team at the scene of the crime. Although she has some experience working with DS Michael McAndrews, she’s unaware that he also applied for her position, unhappy to be bypassed. To the matter at hand, why would someone want to kill a tour boat operator? Then, a prime suspect ends up dead. A lesson on Moby Dick and Captain Ahab is about to play out.

Besides Unforgotten, you’ve enjoyed Nicola Walker in Luther, Last Tango in Halifax and The Split, average Gavel rating 4.125. If the rest of the series is as good as the first episode, expect Annika to get a revised upward rating. Early in her career, Sylvie Furneaux impresses as the sullen Morgan. Annika’s boss is DCI Diane Oban, acted by Kate Dickie seen in The English Game and The Northman. An experienced cast makes Annika worth your time.

Actually, the UK doesn’t have marine homicide units. Scotland does, however, have a Dive and Marine Unit. Why does Annika take Morgan to school on a police boat? They live on the banks of the exotic sounding Loch Lomond.

“Yes, she’s a daffy Norwegian supercop with a dodgy accent. But Walker’s droll dialogue and womansplaining should keep you waterside for the long haul.” The Guardian

“Annika allows Walker to let loose a warm sense of humor.” The Times

Only the first episode is currently free on Amazon Prime. If eligible, you can get a free seven day subscription or pay $5.99 for a month and then cancel. That’s cheaper than a movie and, in most cases, better quality. And, while you have it, explore some of Masterpiece’s other fine offerings.