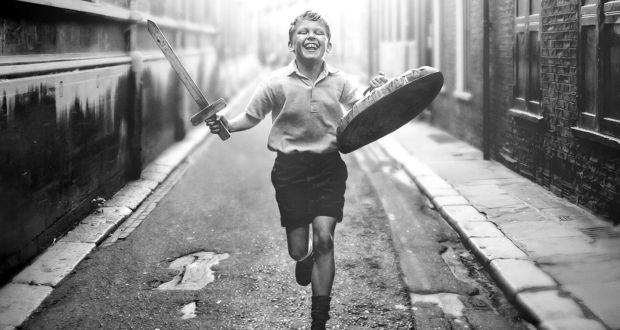 Of the films released this week, The Fat Man at the Movies selected Belfast as the “date-movie.” While it is lovingly filmed as a semi-autobiographical memory of Kenneth Branagh‘s nine year old childhood, and mostly adored by critics, it would not be my choice. Certain factors might change my mind. Buddy worries that if his family moves to a different country, folks won’t be able to understand him. Soothingly, his grandfather tells him, “then they are not listening.” Truly, I listened intently and still missed much of the dialogue. Streaming and subtitles would enhance your viewing experience. So, if he/she is Irish, or has an ear for a different lilt, then Belfast it is.

Another consideration might be art appreciation. No director could capture the mood of 1969 Belfast better than Kenneth Branagh (Murder on the Orient Express, Artemis Fowl). His camerawork adores the faces of the actors. By now, you’ve probably noticed the pictures are in black and white, as is the film. The first film in color was in 1917, though most of us think The Wizard of Oz (1939). In any case, I like, and want color, an explosion of color, if you please. I’m certain there is some deep artistic reason for B&W. You and your date can discuss same over a milk shake, or something a tad stronger, on the way home. As for me, I’m looking forward to tonight’s Red Notice. I give Belfast 3.5 Gavels and it receives an 85% Rotten Tomatoes rating with an early 7.7/10 IMDb score.

Nine year old Buddy plays with his friends as his mother calls him home for dinner. Near his front door, he encounters the ugly attack by Protestants on Catholics. They seek to “cleanse” the neighborhood. Certain that he will wed the girl from his classroom, Buddy cannot understand why a Protestant cannot marry a Catholic. Buddy’s mother and father warn their older son not to join any gang. No one wants to move. This is the only life they’ve ever known and their family is in Belfast. As soldiers move in, is there a better life elsewhere? This film is dedicated to those who left and those who remained.

You all know Caitriona Balfe from Ford v Ferrari. Not really, you know her from Outlander. As Buddy’s worried mother, she is outstanding. Even Jamie Dornan, so lampooned in the Fifty Shades trilogy, performs well as Buddy’s father. Ever delightful, I’ll go with the trite “you could watch Judi Dench and Ciaran Hinds read from a telephone book” as Buddy’s grandparents. The real star of Belfast is Jude Hill in his first major role. As Buddy, he is the innocence of youth.

When was the last time you thought about Raquel Welch in One Million Years B.C.? In a humorous moment, Pa takes the family to the movies. Let’s just say that film is a little less artistic than Belfast. The bit of humor is a nice contrast to the ugliness of the battle between Catholics and Protestants. For those interested in awards, Belfast won People’s Choice at the Toronto Film Festival.

Pro — “Kenneth Branagh makes a masterful memoir of his tumultuous Irish boyhood….set during the Protestant-Catholic conflicts of the late 1960s, the film is both specific and universal, grand and intimate, sweetly romantic and shockingly violent.” Chicago Sun-Times

Con — “With Belfast, Branagh has found a way to go back, and only a cynic would begrudge him that. All we can hope is that he feels more at home than we do in his city of lost dreams.” IndieWire

The Troubles in Belfast lasted some thirty years from 1960 to 1998. Although viewed in terms of a religious conflict, others describe it as political. Protestants wanted Northern Ireland to remain within the United Kingdom and Catholics wanted to join a united Ireland. Over the years, some 3500 lost their lives. Still think this is a date-movie?