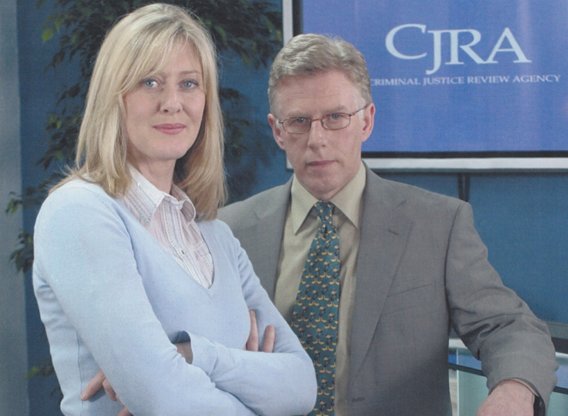 Like Prime Suspect, Rose and Maloney holds up exceptionally well nearly twenty years after its initial airing. Prime Suspect gave you Helen Mirren. Rose and Maloney gives you Sarah Lancashire and Phil Davis, both stalwarts of British TV. Listed as a crime drama, it was not imitated on American TV as was Prime Suspect, yet it is compelling because it is not the same old crimes, the same old criminals. Rose and Maloney brings you the fictional CJRA (Criminal Justice Review Agency). The very first minutes, indicating this series will be something special, finds Rose patting herself on the back for discovering police misconduct to free an “innocent” convict. Then, in front of the camera, he whispers in her ear “I did it!” Rose spirals downward.

Each case in Rose and Maloney, seen on Amazon Prime, is two episodes, totaling 90-120 minutes. Rose has her quirks, and that determination to see her investigation complete no matter how many times her superiors tell her to “close the file.” No one would ever call Rose a “proper English lady.” Her intriguing “dance” with the freed murderer frames an unrelated murder inquiry in Season One.

Initially, Maloney presents himself as a mousey accountant type forever consigned to the bowels of the CJRA basement. He has no desire to be sucked into Rose’s shenanigans. As with most of the men in her sphere, Rose manipulates poor Maloney over and over. By Season Two, and their second investigation, Maloney begins to find his legs and become a more equal “partner.” Only halfway through, but I give Rose and Maloney 4.0 Gavels and note those episodes average a very good 7.9/10 IMDb score.

Still reeling from her “mistake,” Rose is put on light duty in the basement of CJRA. The mother of a man convicted of killing his daughter convinces Rose to look into his case. The cops are not happy, her superiors order her to stand down, and Maloney completely baffled by this individual who refuses to obey orders. The more roadblocks put in her way, the more determined she becomes.

In case two, a 10 year old boy is found with a bloody knife in his hand next to an elderly gentleman with his throat cut. Years later, he writes to Rose for help. The case has so much notoriety that even the Home Office orders the CJRA to stay out of it. Once again, Rose digs in her heels. Will she really sleep with the Home Office representative just to get what she needs?

One publication calls Sarah Lancashire and Phil Davis icons of British filmography. In the last four years, we’ve enjoyed Sarah in Happy Valley, Last Tango in Halifax, and Lark Rise to Candleford. Rose Linden is her best part of them all. In the case of Phil Davis, he’s in Hampstead, Juliet, Naked, Riviera, Poldark, Bleak House, and more. He’s always one of the more watchable characters in whatever he does. Although complete opposites, the chemistry between the two just keep getting better and better.

Generally, I try not to reach this far back into the archives to find something suitable to watch. The combination of Lancashire and Davis was too much to resist. Still, Rose and Maloney is much better than I expected. I’m savoring this one.

“Lancashire as Rose Linden is a hard-drinking, smoking, cursing, rule-breaking investigator with relentless doggedness when it comes to finding truth and justice. She’s diabetic, messy, brilliant, and unafraid.” oldaintdead.com

“The following two seasons of the show are lightyears ahead of the pilot season. These seasons take a deep dive into the reasons why miscarriages of justice can occur beyond simply police misconduct.” the courieronline.com

Admittedly, Rose changes from Season One to Season Two. Where’s the insulin, the drunken binges, and the boyfriend in prison for murder? Overlooking a few flaws, Sarah and Phil are still terrific!