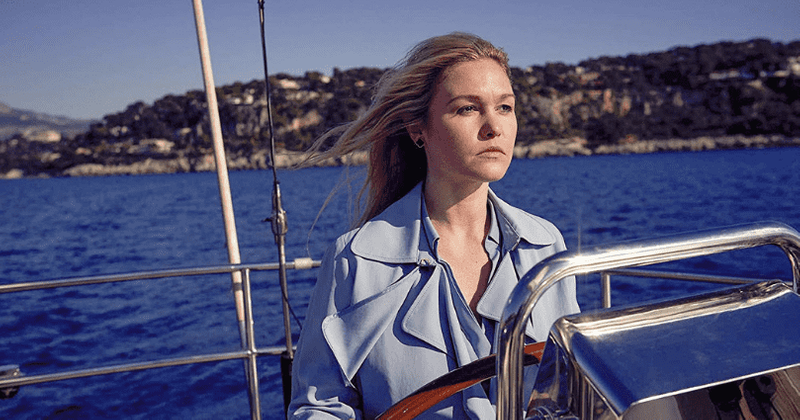 Not since Crazy Rich Asians have you seen such opulence as in Riviera. Of course, when your husband’s a billionaire, one expects art, villas, planes, yachts, cars, and fashion. Riviera doesn’t let you down. When Constantine is blown to smithereens on a Russian yacht amid an Interpol investigation into money laundering, Georgina learns of forged paintings. Do fake paintings mean a faked death? Then she remembers a quote by Beaudelaire, “the greatest trick the devil ever pulled was convincing the world he didn’t exist.”

In a ten-part series (45 minutes each) on Sundance, Riviera is full of French mobsters, Russian mobsters, assassins, crooks, and connivers. As a visual feast, you won’t find much better. As a story, it makes a pretty fair soap opera. In an attempt to bring something different, the writers want you to suspend belief. Even for Monaco, the deviousness runs a tad too deep. I give Riviera 3.5 Gavels and it receives a 63% Rotten Tomatoes rating with a 50% Audience score for the first season.

His father also killed on the yacht, Grigory Litvinov advises Georgina that it was no accident. Inspector Karim believes a prostitute from Jakob’s “harem” is involved but she escapes from the hospital. Georgina and the three children, Adam, Christos, and Adriana, each inherit one-fourth but Interpol freezes all their assets. Irina, Constantine’s first wife and mother of his children, asks her lover, Jakob, to help her get back what is rightfully hers. Murder, torture, and mayhem are to follow.

Julia Stiles, so good in the Jason Bourne films, just doesn’t quite fit here as the revenge-minded Georgina. Conversely, Lena Olin. as Irina, plays the underhanded ex-wife as well as anyone. You can’t help but hate her. In flashbacks, Anthony LaPaglia plays Constantine, in a very limited role.

“Everything he does is to obscure the truth” says Georgina of Constantine. So was their marriage a scam? Or, as Constantine might reply “no matter how well a man conceals his secrets, his wife will always find the truth.” But, will she like it?

Empire Magazine writes “yes, it looks great but Riviera is overly serious, frequently implausible and not terribly memorable; in art terms, it feels like an expensive frame, plonked on a finger painting.” Overall, I’m glad I came for the visit, but I’ll not be hanging around for Seasons 2 and 3. I’ve seen the scenery and it’s now time to travel elsewhere.