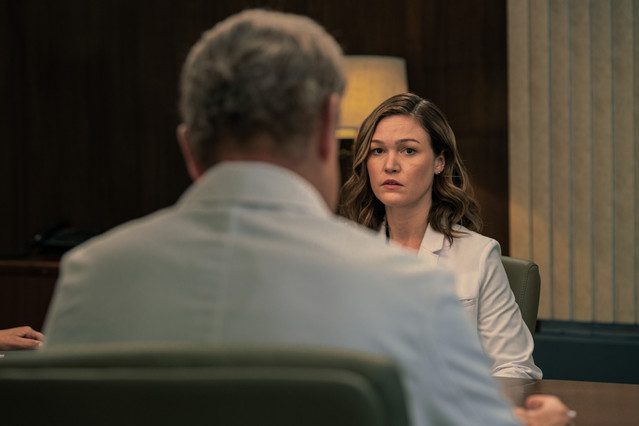 Would you serve on The God Committee? Maybe you feel your ethics education needs a refresher course. Where better to look than the decision of who gets to live and who gets to die? Naturally, The God Committee doesn’t make it easy. After all, there are no perfect persons, no perfect candidates for a new heart. Then, this 90 minute film on Netflix ups the ante by putting in a time crunch. “We can’t waste a heart.” As if the decision to move someone up on the wait list is not excruciating enough when time is not a factor, today you have 60 minutes to decide between three flawed candidates.

With a fine ensemble cast, The God Committee does a fine job of ramping up the tension, flip-flopping the decision of who is the better candidate. Yet, once again, it is the confounded determination of directors to go back and forth in time, in this case seven years, that mars their film. In an effort to show the “results” of their earlier decision, The God Committee loses its intensity, its raison d’etre. An otherwise fine film turns into a maudlin endeavor. Is this a movie about ethics or that even the best of doctors is also flawed? I give the flick 3.5 Gavels and it receives a 63% Rotten Tomatoes rating and a 5.8/10 IMDb score.

After a tragic bicycle hit-and-run in Buffalo, a heart is on its way to Serena Vasquez in NYC. In a terrible twist of fate, she dies on the table as she’s being prepped for the transplant. With no time to re-direct the heart elsewhere, The God Committee has three potential matches. Walter is overweight, bi-polar, with a history of suicide. Janice is not sure she wants some foreign object in her body. Trip is a likely drug abuser, but his father offers to make a $25 million donation to the aging hospital. You have sixty minutes to decide.

Dr. Jordan Taylor advises that she “doesn’t know what this” is with Dr. Andre Boxer. Nor does the audience. The attempt to put a relationship between Julia Stiles (Riviera) and the 27 year older Kelsey Grammer falls flat on its face. Grammer is fine as a curmudgeonly, driven doctor, but no one would ever put his character in bed with Stiles. Of course, no one knows of their “fling,” yet both sit on The God Committee, the very first of many ethics violations. Does anyone say “slippery ethics manipulator” better than Dan Hedaya (Trip’s father)?

Speaking of “slippery ethics manipulators,” don’t forget about Father Dunbar, the Board’s “attorney” who sits in on The God Committee‘s decisions. An attorney who is about to be disbarred finds God. “Think how many lives $25 million would save.” His character is a stretch, though I’m sure sudden, proposed donations of his sort are not.

“It feels as if the story has been given a last-minute melodrama transplant.” Guardian

In the end, this may not be your vehicle for an ethics transplant, but I doubt if any of you will be volunteering to serve on The God Committee.