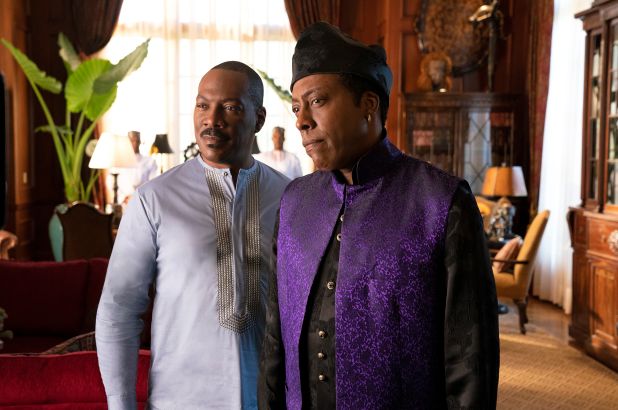 Silly and salty, did we really need Coming 2 America? Critics contend the film is a remake with the same gags. Since the original was thirty-three years ago, I’ll take their word. Coming To America made somewhere around $300 million on a $36 million budget. On that basis alone, why not give it a try? Besides, we have a whole new generation of sixteen year old boys who will latch onto rising stars Teyana Taylor, KiKi Layne (If Beale Street Could Talk), and Nomzamo Mbatha.

If that seems to suggest Coming 2 America relies on suggestive female clothing and movements, go to the head of the class. Eventually, King Akeem accepts female empowerment but, for him, change takes thirty years. Much of the film could be Eddie Murphy and Arsenio Hall doing sketches on Saturday Night Live, especially the barbershop scenes. Maybe that’s why Colin Jost (Tom and Jerry) got cast. Musically, it’s nice to see En Vogue, Salt-N-Pepa, and Gladys Knight, although, at some point, it seems too much like a reunion. I give Coming 2 America 3.0 Gavels and it receives a 50% Rotten Tomatoes rating with a 5.6/10 IMDb score.

As his father lies dying, Prince Akeem learns he has a thirty-year old son back in Queens. Since only a male heir can inherit the throne of Zamunda, Akeem and Semmi must find him before General Izzi of Nextdoria attacks. “It’s better to bond by blood and marriage than be divided by blood and war.” Queen Lisa and Princess Meeka are not happy to discover Akeem has a son, even if conceived under unusual circumstances. But this changes everything. Now, instead of marrying off his son to Meeka, Izzi proposes a betrothal of his daughter to new Prince Lavelle. Funny how love gets in the way of the best of intentions, even in the patriarchal Zamunda.

Although Murphy and Hall star, Leslie Jones (Angry Birds 2) is the scene stealer. Typically, she comes on strong, and early on, she is no different. Then, as Lavelle’s mother, she just takes over. Wesley Snipes is way over-the-top as General Izzi, but then so are most of the older actors. Don’t miss Morgan Freeman (Angel Has Fallen) as the emcee for King Jaffe’s pre-funeral. Like I said, Coming 2 America has the feel of a reunion.

“Every prince promises change” is the phrase every female in Zamunda knows all to well. Still Princess Meeka helps Prince Lavelle pass “the princely test.” After seeing Izzi’s daughter, Bopoto, waltz in like Cleopatra, will Lavelle forget about the Royal Groomer, Mirembe.

For — “No over-budgeted, under-scripted thirty-years-too-late Eddie Murphy sequel should EVER deliver as many smiles as this.” Movie Nation

Against — “Coming 2 America includes so many nods to its predecessor that it feels like a feature-length Easter Egg in search of a movie.” Hollywood Reporter

You will mine some laughs out of Coming 2 America. Just don’t expect to be rolling off the couch!