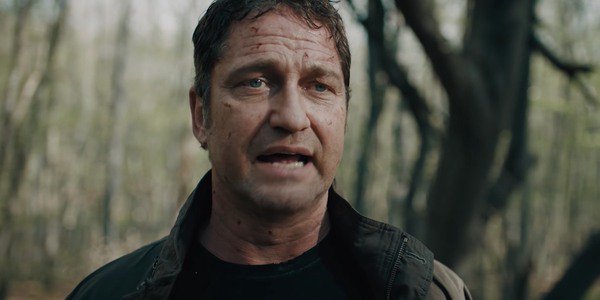 Gerard Butler is no Shakespearean actor, but then Shakespeare never delivered this kind of ACTION. Olympus Has Fallen, London Has Fallen, and now Angel Has Fallen, only to rise again, and again. Admittedly the acting is average, but where else can you see a coordinated drone attack. It was impressive. Hand-to-hand combat, bodies thrown by grenades, tunnel escapes, collapsing buildings, it has it all! Pay no attention to the critics; just look at that Audience score of 94%. You will get your adrenaline rush. I give this movie 3.5 Gavels while the miserly critics (Boo! Hiss!) only rate it at 44%.

Mike Banning’s body has seen better days. He doesn’t want to leave field work, but knows the pills will only work so long. When President Trumbull offers him the job of Director of Secret Service, he hesitates. The President is attacked and both will wake up in the hospital. The difference is that Mike is in handcuffs, accused of an assassination attempt in collusion with the Russians. Who would be stupid enough to try to frame Mike Banning?

Gerard Butler is Mike Banning, the master of the grimace. Our President is none other than Morgan Freeman who has probably spent more time in the White House than most of our Presidents. Actually, he was President once before in Deep Impact. Slime, thy name is Danny Huston. He always seems to play the bad guy, most recently in Yellowstone. Seriously, can’t we find some other role for this guy? Nick Nolte is Banning’s father, and by far the best in this movie. The next flick should be Clay Banning is Fallen. Give us more Nick Nolte. Piper Perabo and Jada Pinkett Smith have small roles as Banning’s wife and an investigating FBI agent, respectively. Smith, especially, seems out of her element.

On a beautiful Sunday afternoon, Angel Has Fallen was well-attended which confirms the better than expected opening gross. Since Olympus made $170 million on a $70 million budget and London did even better earning $207 million at a cost of $60 million, will there be another Fallen? Why not? Nick Nolte gives a jolt to the franchise as the producers recognized in a post-credit scene. Certainly, this is not Oscar-worthy, but a nice end-of-summer action flick, nevertheless.