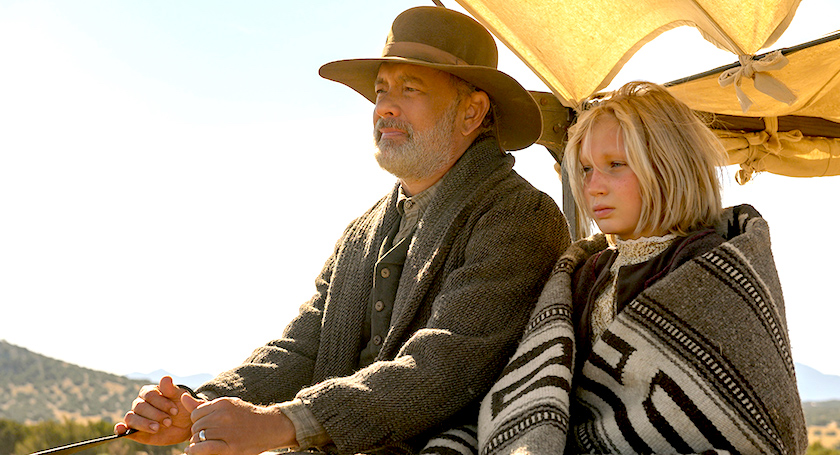 Is there such a thing as too much Thomas Jeffrey Hanks?

By the looks of the trailer, News of the World should be a nice Christmas present for us all. Captain Jefferson Kyle Kidd travels the West in 1870 reading the news to those without access. While delivering the news about the Fifteenth Amendment (right to vote for all men), a 10 year old girl is entrusted to his care. Captured by Indians 4 years earlier, she speaks no English and has no desire to be taken hundreds of miles to relatives she’s never met. Tom Hanks (Greyhound) and a 12 year old German actress named Helena Zengel make quite a pair.

Nominated for seven Tony awards, The Prom tells the story of a young girl who wants to take her girlfriend to the prom. When the school board learns of her plans, the prom is cancelled. Several down-on-their-luck Broadway performers descend upon Indiana to give her “the night she deserves.” At times, Netflix seems more concerned about quantity rather than quality, but it seems with Meryl Streep, Nicole Kidman, Keegan Michael-Key, James Corden, and Kerry Washington, they can’t mess this one up. This musical comedy will be released December 11.

Raya and the Last Dragon will make its appearance March 12, 2021. Voiced by Kelly Marie Tran (Star Wars: The Rise of Skywalker) and Awkwafina (The Farewell), Raya searches the land for the last dragon. At one time in the world of Kumandra, humans and dragons lived peacefully together. Five hundred years ago, an evil force required dragons to sacrifice themselves to save humanity. Now, that evil returns. One never tires of dragon stories, witness: Game of Thrones and How to Train Your Dragon.

As our TV watching habits change, there a very few shows that I watch week-to-week. I would much rather binge. Ted Lasso was an exception; I couldn’t wait to see what he did next. The Mandalorian and Baby Yoda fit into the same category. Begin the next eight episodes on Disney+ tomorrow through December 18. Certainly, Moff Gideon is still on their trail!

Maybe the young like their big screen TVs, too!

“All we can do is own it,” says Jeffrey Katzenberg as he and CEO Meg Whitman announced that Quibi will end on December 1st. If you remember (Thursday Morning Coffee — 10/3/19), the best and the brightest invested over $1 billion certain that our youth would pay $8.00/ mo. to watch 10 minute serialized shows available only on mobile devices. After all, everyone knows the young have the limited attention span. Or, at least have limited time to spend enjoying videos. With his grand idea, Katzenberberg poached some of the top folks from Netflix, Lionsgate, NBCUniversal, and Snapchat. With its shutdown, did Quibi learn that viewing habits are harder to change than expected?