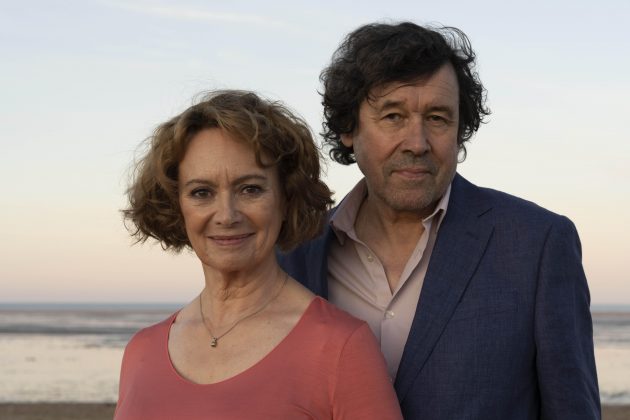 Soon to be Queen Elizabeth in The Crown, Imelda Staunton‘s impressive career (four Olivier Awards among thirteen nominations) takes a brief turn to the familiar in Flesh and Blood. After all, one of those wins includes the amoral Mrs. Lovett in Sweeney Todd. Perhaps not as amoral as Mrs. Lovett, but as neighbor Mary Bennett, Staunton brings a quiet deviousness designed to keep things as they are. How dare Dr. Mark Kineally upset the “happy” lives of the neighbors of some forty years? Certainly, she’s not above twisting matters to further her ends.

In this short Masterpiece series (four episodes) available through Amazon Prime, Flesh and Blood takes us to the stunning white cliffs of . . . West Sussex on the south coast of England. As expected, the cast excellent, the production values top-notch, and the story entertaining. Flesh and Blood opens with a body found (seriously injured) but the identity of the victim and defendant remain unknown through the first three episodes. Interwoven in the story is D.I. Doug Lineham interviewing Mary and “the children.” I give Flesh and Blood 4.0 Gavels and it receives a 90% Rotten Tomatoes rating with a 7.0/10 IMDb score.

Vivien, a widow of some eighteen months, summons her children to her seaside house to tell them that she has met someone. Helen, Jake, and Natalie greet the news with varying degrees of acceptance. Each has stress in their own lives in their relationships and jobs. Next-door busybody Mary, stiff upper lip and all, seems pleased until she finds her best, and only, friend begins to ignore her. On the surface, Mark appears the perfect man for Vivien. As Tony, Natalie’s married lover, says “everyone lies.” So, who lay in the hospital on the brink of death?

Seen in Grantchester and Lark Rise to Candleford, Claudie Blakley is the elder daughter, Helen. As the acting CEO of three hospitals in distress, and in a loveless marriage, she wonders how her healthy mother suddenly collapsed. Heavily in debt and separated from his wife, Jake uses his lover to uncover concerning information about Mark’s first wife. The role of Jake is acted by Russell Tovey (Banished). Lydia Leonard (Gentleman Jack) is Natalie, in a five-year affair. She is originally supportive of her mother’s new man, but increasingly on edge.

Of note to Flesh and Blood is the rather unique method of storytelling. With the detective interviewing each character in a different episode, the lies and deceptions slowly leak out. It is a prime example of folks prevaricating to make themselves feel better while looking more guilty.

Or, as WETA puts it “viewers are left to discern where the truth lies with these characters, all of whom are lying openly, lying covertly, or lying to themselves.” The Wall Street Journal writes “the appeal of the children’s stories can’t be overstated — they’re the essential strength of this drama, the core of its unfailing suspense.” Flesh and Blood is yet another fine crime drama from the Brits. Give it a go!