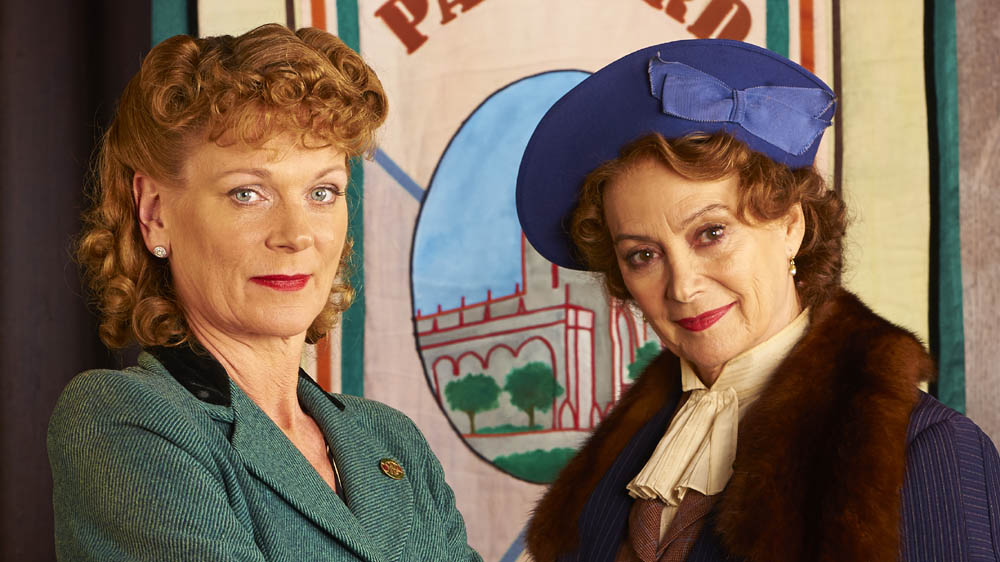 I can’t recall a character I so much wanted to be killed off as in Home Fires. Based upon the book Jambusters, the twelve-part, two season Masterpiece series, available on Amazon, focuses on the female effort during World War II. The members of the Women’s Institute well remember the sacrifices of The Great War. After all, “no one understands the true cost of war better than the women.” Home Fires brings it to the forefront. “It’s not the same as the last time. They have better ways to kill now.”

The first three episodes of Home Fires start slowly as Joyce and Frances battle for control of the direction of the Women’s Institute. Women cannot fathom why their husbands and sons enlist. Kate meets a handsome young pilot and demands a quick wedding, uncertain of their future. Pat toils under the abusive hand of her journalist husband. By episode four, the secrets, the blackmail, and the betrayals come quick and certain. It won’t be long until the threat of invasion is on everyone’s mind. Home Fires is yet another well-done period piece earning 4.0 Gavels, 100% Rotten Tomatoes rating and 8.2/10 IMDb score.

In August 1939, Joyce Cameron, President of the Women’s Institute believes it should shut down for the duration of the war. Frances Barden requests a vote of no confidence as the women need to do their part. Why not help out with the food supply, an air raid shelter, and first aid training? As a team, could they be “unstoppable” or “unthinkable?” Still, is it wise to plow up the cricket patch for a few more vegetables? Everyone is watching: everyone is watched. “This is a dangerous time to be the subject of gossip.”

Samantha Bond (Downton Abbey) and Francesca Annis (Flesh and Blood) square off as Francesca and Joyce, respectively. Both upper class, both stubborn, they have a grudging respect for each other. The most vile of characters, Bob Simms, acted by Mark Bazeley (Hanna), is the classic spouse abuser, both violent and controlling. You wish him a long and painful death.

Each episode advances the story of the townsfolk of Great Paxford approximately one month. Set near an RAF airbase and on the flight pattern to Liverpool, the threat of Nazi bombers remains constant. Sadly, Home Fires ends after two seasons, in the middle of the Battle of Britain.

“For all its grim underpinnings Home Fires is a buoyant work, one whose most terrible character is the war itself, the Nazi enemy that could invade at any time.” Wall Street Journal

“As the stakes rise, so does the intrigue, from a bookkeeper coerced into covering up war profiteering to a conscientious objector whose unwillingness to fight leads him to be labeled a coward and shunned by those fearing for sons and husbands in harm’s way.” Variety

Initially, I didn’t expect to last the entirety of Home Fires. Ultimately, I wanted more.