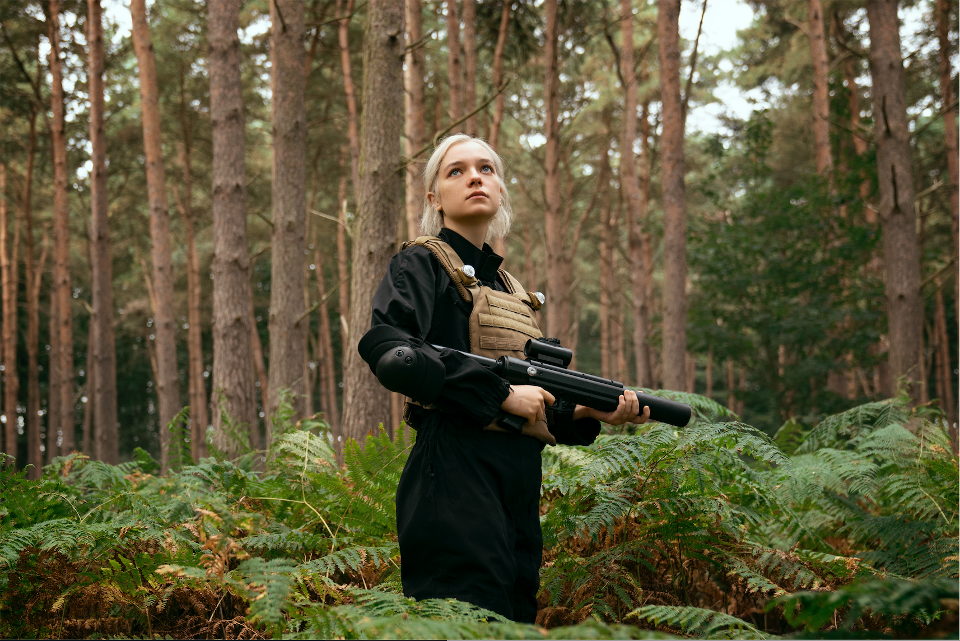 Who would suspect an 18 year old in pigtails of state-sponsored murder? With that, off we go with an excellent Season Two of Hanna, now out on Amazon Prime. You may recall the fine 2011 film of the same name with Saoirse Ronan, Eric Bana, and Cate Blanchett. Season One of Hanna with Joel Kinnaman (For All Mankind) was good. This one is “intense and addictive” (Forbes).

Parts of Hanna are reminiscent of the 1960’s The Prisoner, a sequel to Secret Agent, where a spy wishes to retire, but his superiors keep him imprisoned despite numerous escape attempts. Here, rogue CIA operatives develop UTRAX, an in utero enhancement to create perfectly refined military tools. To train assassins to kill, the CIA uses drug implants, propaganda, and indoctrination, not unlike the KGB’s Red Sparrow program. I give Hanna 4.5 Gavels and it receives an 89% Rotten Tomatoes rating with an early 76% Audience score.

Her father killed, Hanna seeks to protect UTRAX escapee, Clara, in a Romanian forest. But, Clara is haunted by the fact that her mother may still be alive. John Carmichael, CIA chief of The Meadows, promises fellow agent, Marissa, that he will remain silent about her complicity in Hanna’s escape, if she will assist in the return of Clara to the training facility. A trap is set, but who will be ensnared? Taught by her father to trust no human, will Hanna be able to survive on her own? Are Hanna and Clara part of a much deeper conspiracy?

The part of Hanna is a physical, as well as an emotional, role. Esme Creed-Miles plays it convincingly. Her complicated relationship with Marissa Weigler forms a wonderful arc in the series. Marissa is acted superbly by Mireille Enos, recently seen in Good Omens. Matching wits with John Carmichael, Hanna and Marissa have their hands full. Somewhat surprisingly, Dermot Mulroney owns that role.

For these thirty young female trainees, the goal is to remove all inhibitions to insure maximum extreme violence. In other words, lots of action in this one, as well as lots of cat-and-mouse mind games. As TV Insider points out “the violent, tense action leads to tragedy and, typically, some wildly improbable rescues and escapes. But it’s not like that ever hurt James Bond‘s reputation.” CBR.com explains that “by showing more of the world of UTRAX and forcing Hanna to make tough choices as she confronts how she can impact the world, the series becomes more thoughtful and insightful, while also serving up all the butt-kicking action fans have come to expect.” Ultimately, Hanna will get her hooks into you. Expect to binge!