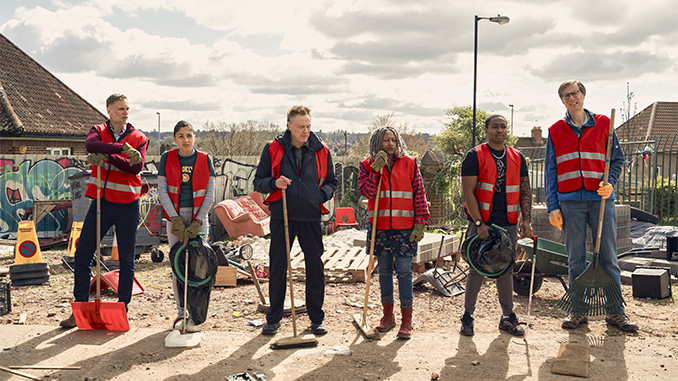 After a brief flirtation with Disney’s Better Nate Than Ever, I began a love-hate relationship with Amazon’s The Outlaws. What happened to Nate (86% Rotten Tomatoes and 6.3/10 IMDb)? Nate is the nerdy seventh grader who loves Broadway but fails to get cast as the lead in his school’s Lincoln: The Unauthorized Rock Musical. He doesn’t even get the understudy to the lead role, rather Nate will appear as a tree. So, he and best friend, Libby, take a bus from Pittsburgh to NYC to attend an open audition for Lilo and Stitch. There, they just happen to run into his aunt, a Broadway actor, estranged from Nate’s mother. The ads promised I’d fall in love with the songs. I didn’t and after about 45 minutes of juvenile hijinks, I left for Bristol, England.

The Outlaws is a six part series that receives a 71% Rotten Tomatoes rating with a 7.7/10 IMDb score. In retrospect, I probably needed to give it more time. The witty repartee is fun, especially as it takes on political correctness, but the main characters, save Rani and Christian, annoy, really annoy. Seven miscreants get Community Payback instead of jail. Translated, that means they will work four hours each day cleaning up an abandoned community center.

Each is a type, John the right-wing blowhard, Myrna the left-wing militant, Lady Gabby the spoiled debutante, Frank, the shifty old guy, and Greg the whatever he is. That leaves Christian as the bad boy and Rani as the East Asian good girl. Actually, she’s a kleptomaniac whose entrance to Oxford depends on her staying out of trouble. Together, it’s them against Diane, their supervisor, who is pretty awful herself. After one episode, The Outlaws gets only 2.5 Gavels.

Diane recruits Rani to be a snitch even as Lady Gabby warns her that “snitches get stitches.” Christian must steal for a local gang or his sister will “volunteer.” Just out of prison after eight years, Frank’s daughter refers to him as a lying, thieving b_______. John messes up a deal with the Chinese that could have saved his business from bankruptcy by being late. This is a desperate crew that finds drug money hidden in the ceiling of the Center. Already in trouble for the poor choices they made, they are about to make more.

The two recognizable names are Christopher Walken (Frank) and Eleanor Tomlinson (Gabby). Walken is his usual self, see War With Grandpa. Tomlinson is a long way from her Poldark persona. Most notable is Rhianne Barreto, seen in Hanna, here as Rani. Clearly, she is the brains behind this caper.

While episode one introduces the viewer to all the characters, their misdeeds are not all revealed. For example, we know Lady Gabby is a rich, social media influencer, but no idea how she ended up sweeping rats and badgers. Greg, a 6’7″ attorney, going through a divorce, also seems an unlikely participant. Sorry, Amazon, I just don’t want to associate with these narcissistic misdemeanants anymore.

“There are one or two laughs, mostly from Merchant, but the overall effect is very BBC comedy, and not entirely in a good way.” Independent (UK)

“The series is nothing if not a plea to be forgiving of flaws — and the affection it shows for its characters, as well as the affection the characters eventually start showing each other, is just winning enough to make you want to comply.” Hollywood Reporter

Sorry, no affection for the characters here. Of course, it was a short visit.