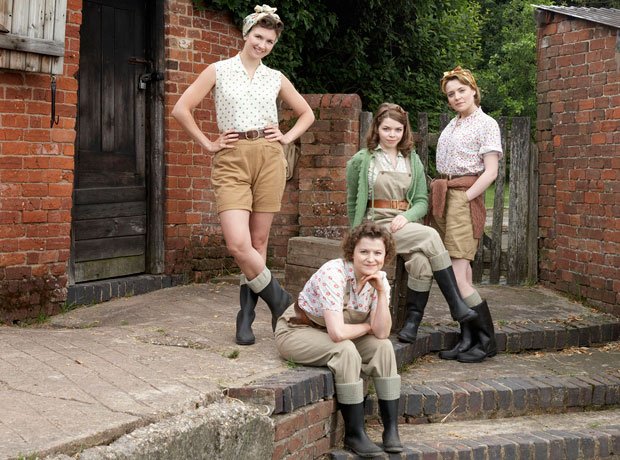 Before there was Home Fires, BBC produced Land Girls. Formally known as Women’s Land Army, the Brits needed to replace farmhands called up for the war. At first it was voluntary, but later used conscription. Like Home Fires, the Land Girls did their part to ensure the food supply for the country. In my opinion, the latter is more soap opera, but if you like one series, you will enjoy the other. Speaking of soap opera, Land Girls won Best Daytime Programme for 2010, so maybe they knew their audience.

Each of the three seasons, available on Netflix, consists of five episodes. New girls, Nancy and Joyce arrive in Helmstead, not far from a RAF base. On the way to the Hoxley estate, a Spitfire reminds them that the war is never far away. Lady Ellen Hoxley quickly lets them know that farm life is not easy. Notwithstanding her warnings, the main characters all seem to find love, despite the mud and blisters. Throw in some black market carrot whiskey, suspected spies, AWOL soldiers, injured animal, and a pregnancy, and, well you get the picture. Overall, I give Land Girls 3.5 Gavels and it receives a 7.0/10 IMDb rating.

Sisters Annie and Bea escaped an abusive father to live on the farm. Her house in Coventry destroyed by Nazi bombing, and her husband in the RAF, Joyce has no place else to go. The “warden” of the farm, Esther, awaits word from her POW husband. Nancy looks for a husband, but Lawrence Hoxley’s wife can send her packing at any time. Farmer Frederick Finch is one step ahead of the food rations officer, but for how long? Will the farm bring these disparate characters together, or tear them apart?

Sadly, Land Girls has none comparable to Home Fires‘ Samantha Bond and Francesca Annis. The closest are Sophie Ward and Summer Strallen as Lady Hoxley and Nancy, respectively. They fight over the same man, but are rarely on the screen at the same time. Sadly, Nancy is only in Season One. If you are a fan of Doc Martin, Frederick Finch is a Bert Large-type character, played wonderfully by Mark Benton.

Farmer Finch tells his son, Billy, if you want to win Bea, “you got to be the better dog.” Seventeen-year old Bea has plenty of suitors. Sergeant Dennis Tucker, head of the Home Guard, is the town busybody and sees conspiracies everywhere. Land Girls does not lack for subplots.

“The complex and sometimes painful personal narratives in Land Girls are rooted in the larger story of a community enduring a changing global landscape.” Willow and Thatch

“In between copious amounts of hard work, the women experience love, loss, friendship, scandal, betrayal and much more in the beautiful English Countryside.” The Silver Petticoat Review

For WWI aficionados, there is a passing reference to Passchendaele (scene of the third battle of Ypres). Lawrence Hoxley finishes his wife’s sentence “such a beautiful name . . . for such a living nightmare.” Land Girls is no nightmare. Rather, more like a pleasant nap.