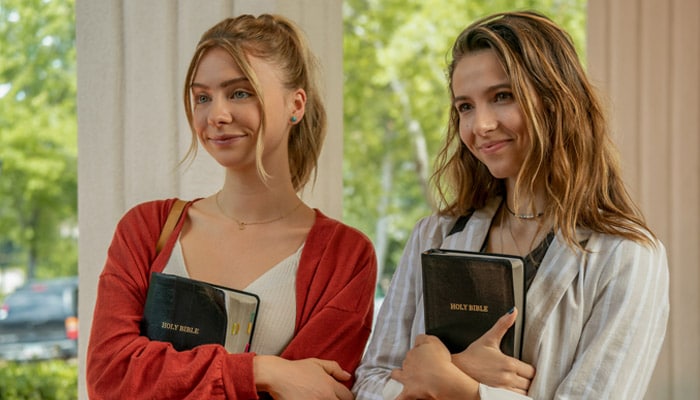 Relating their aforesaid sexual experiences, distracted twins Sterling and Blair wreck their daddy’s pickup truck. As fate would have it, the other driver skipped bail. Bounty hunter Bowser shows up to claim his prize but needs an assist from the girls. After some haggling, he agrees to split the reward that they now need for repairs. All this is the sideshow for the real job of attending Willingham Academy, a very religious high school. References to the Bible to justify their actions come early and often.

You need Roget’s Thesaurus for a list of all the adjectives to describe Teenage Bounty Hunters. Inventive, unbelievable, politically correct, sacrilegious, unexpected, and silly are a few that come to mind. I give credit for creativity, but make deductions for presentation.

With so very few Top Critics reviews, here are opposing views. Hollywood Reporter gives a thumbs up with “Teenage Bounty Hunters is propelled by excellent comic performances by Phillips and Fellini, who don’t look all that similar but do share a fizzy chemistry, especially in their crackerjack-timed quips and clairvoyant communications.” The Detroit News is less enthusiastic noting “basically you’ve got a cheeky high-concept premise that doesn’t know where to go. Stars Phillips and Fellini deserve better; so does the audience.” Early on, the minister tells his congregation, as he is about to talk about sex, that “unless you want to have an uncomfortable conversation at the breakfast table, it’s time for the young ones to go with the youth pastor.” Similarly, if you have youngsters that might stumble onto this show, you might want to heed his advice.