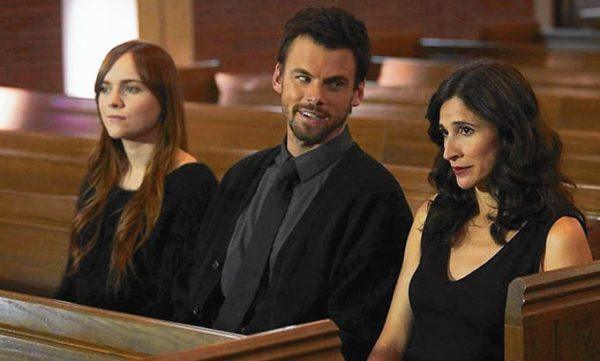 INTENDED FOR MATURE AUDIENCES precedes Casual, and therefore, I guess, this article. How do you forget about your cheating, soon-to-be ex-husband? Valerie’s best friend, her brother Alex, recommends that she find herself another man. But, as single, never-married, sleep-around, developer of a dating site, is he the one to give advice? And what about her sixteen-year old daughter, Laura. Is Alex a good role model for Laura to be around?

Casual is about casual sex, yet more thoughtful than most adult dramedies about sexuality, because it could just as easily be entitled Consequences. Like Party Down, this ten-part (25 minute each) Hulu series impresses with a 92% Rotten Tomatoes rating and a 90% Audience score. With the TV-MA designation, expect significant nudity and sexual references, especially in the early episodes. Unlike Party Down, these characters are best “friends,” and care about each other. Each time one makes a misstep, the other is there to lend a hand. Season one didn’t end as well as I might have hoped. Then again, there are three more to go. I give Casual 4.0 Gavels.

Divorce pending and with nowhere else to go, Valerie and Laura move in with Alex. Still reeling from an unhappy childhood, Valerie and Alex bond against their mother over abandonment issues. Is she why Valerie “made a long chain of self-destructive choices that led to the dissolution of a loveless marriage?” Moreover, is she why Alex is unable to commit to a relationship? Sexually active Laura seems to “know” more about sex than her mother, but maturity is another matter.

Michaela Watkins (Brittany Runs a Marathon) is another of those familiar-face actors who gets a chance to lead her own show. Casting her as therapist Valerie only enhances her inner conflict as she struggles with re-entering the dating pool. One initially assumes that Alex is a pretty shallow guy, interested in only having a good time. As portrayed by Tommy Dewey, he is something of a revelation. Certain that her mom is her “best friend” until an “incident” causes the “anger factory” to emit “undertones of rage,” Tara Lynne Barr is Laura.

“We wait for our parents to apologize for messing us up, and they wait for us to say thank you. Neither gets what they want.” I’m sure there’s a grain of truth in that quote. Does the shared dislike of their parents keep Alex and Valerie in the same household? After a particularly ugly Thanksgiving dinner the parents, Alex’ girlfriend-du-jour says “don’t all parents become crazy at 65?” More truth?

RogerEbert.com writes “the comic situations and commentary on how difficult it is to find love in the era of Twitter and texting feels organic to the three people at the center of this remarkably well-crafted and well-acted piece.” NPR notes “in the writing and in the performances, there’s bottomless compassion for this family and its awkward efforts at healing itself.” After nearly 48 years of wedded bliss, I know little of dating in the modern world. Still, I can just imagine the awkward, uncomfortable, sometimes embarrassing rendezvous that occur. If interested, Casual will give you a glimpse. More importantly, you will find family, warts and all.