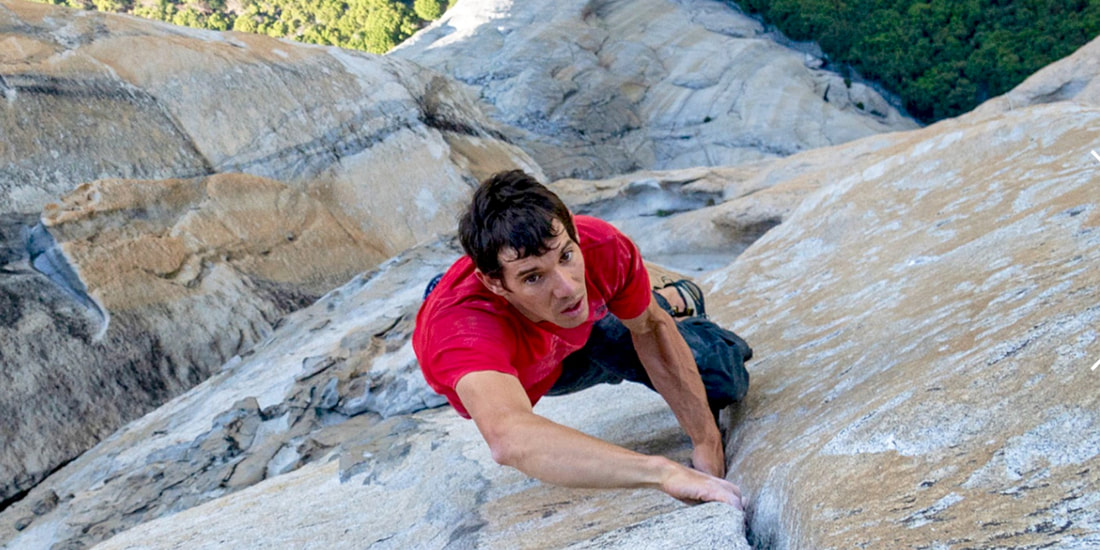 Free Solo is ninety-six exhilarating, heart-thumping, freaking-out minutes of insanity. Literally. You will watch an MRI of Alex Honnold’s brain to make sure nothing is wrong with him. Why would anyone want to climb El Capitan at Yosemite without ropes? The best of the best free soloists know its too dangerous. Free Solo won the 2019 Oscar for Best Documentary and gets a 99% Rotten Tomato rating and a 94% Audience score. I am no fan of heights and know nothing of rock climbing. Still, this is a “you can’t take your eyes off this train wreck” kind of a movie. I give it 5 Gavels.

For seven years, Alex thinks about climbing El Capitan free solo, something no one has ever done. He knows that “one mistake, one slip” on this 3200 feet of sheer cliff granite face and “you die.” After not falling in years, he falls two times in one month in 2016. Did he lose focus because of new girlfriend, Sanni? “If you push the edge, you eventually will find the edge.”

Alex Honnold is no ordinary climber. That would be too simple. He is driven, and he prefers the solitary climb. Then, Sanni McCandless enters his life. Will he listen to her fears? Jimmy Chin, photographer, wonders if cameras put undue pressure on Alex. Tommy Caldwell, climbing companion, explains the “madness” of the endeavor from the viewpoint of an expert free soloist.

On June 3, 2017 Alex makes his second free solo attempt at “the most impressive wall on Earth.” Four hours of unflinching focus and screaming muscle strain await him. It is so nerve-wracking that some of the cameramen can hardly bear to watch. Sanni, sent away to avoid being a distraction, cries. Disappointed that I missed this movie at the theaters, I found it on the National Geographic channel. If this was just a movie about Yosemite, it would be terrific. Add this monumental feat of craziness, and you get a film for the ages!