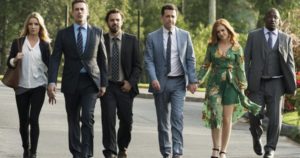 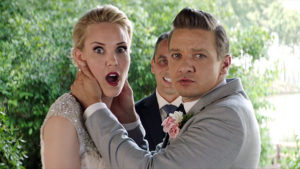 May this flick rot in the cesspit of charred movie reels.  Only slightly better than the Disaster Artist, it had the same number of laughs.  Zero.  I repeat, zero.  Everyone associated with this movie should be hanging their heads in shame.  It is vulgar with a capital V.  Much of the dialogue feels like they just made it up as they were filming.  What a waste of a $28 million budget.  When the trailer is bad, it is a pretty sure bet the movie is not going to be any better.  And this was a bad trailer.  You might now ask, “What did I really think?”  Based on a true story, these writers (I use that term loosely) have taken what was probably a fun game and have ruined the whole idea.

Thirty years ago a group of five friends decided to play tag for the whole month of May.  The last one tagged for the month, was the loser until the next year.  All have been tagged except Jerry, who is getting married and, reportedly, wants to retire.  This is their last chance to corner him.  Nothing is off limits.  You can lie, wear disguises, even tag during childbirth.  But, the rules specify that no women allowed in the game.  This game is supposed to make the players closer, a family.  But does it really?

Jerry is played by Jeremy Renner, a fine actor who is really scraping the bottom here.  Ed Helms is Hoagie, an actor who is very familiar with the bottom.  Jon Hamm is Bob.  Surely, he has fired his agent for this fiasco.  Jake Johnson is Chilli, unconvincing as a stoner.  Hannibal Burress is Kevin.  I am sure he could have written a better script if they had given him a laptop.  Annabelle Wallis, Rashida Jones, Isla Fisher, and Leslie Bibb were given token roles.

The end of the movie shows the real gentlemen upon which the movie is based.  It would have to be embarrassing for them to watch the movie with friend and relatives.  Their mothers would wash their mouths out with soap.  What is described as a “heartwarming story of friendship” has been turned into mean-spirited, near revenge.  Like those crazy daredevil shows who say “Don’t try this at home,” this should also come with a warning.  “Don’t watch this at home, or anywhere else.”   This is a complete waste of money and 100 excruciating minutes of hoping the movie would soon be over.  It is bad.  Real bad.