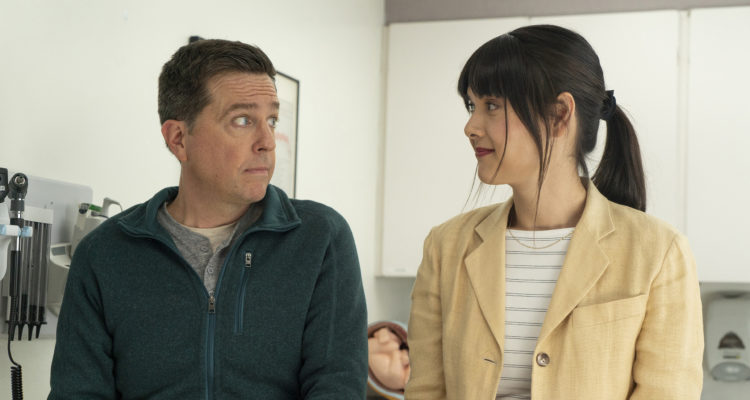 Hot on the heels of the “worst wig” in Jupiter’s Legacy, Together Together gets the nod for “worst ending” of a movie in 2021. As shown by its 91% Rotten Tomatoes rating, this 90 minute comedy available on Apple TV+ is not a bad comedy. At time it is very sweet, think soft chuckles rather than belly laughs. Rather, the writer/director creates such an unlikely scenario that she doesn’t know how to end it, so she doesn’t and proclaims it art. Art, Schmart! Give us an ending, or don’t bother us! Besides, just what is the relationship of Matt and Anna?

Together Together takes a look a surrogacy, and boundaries. Forty-five year old app designer, Matt, wants a family but has no significant other. Twenty-six year old coffee shop employee, Anna, believes no one should be alone, and the $15,000 is too much to pass up. They have a lengthy surrogacy contract but the devil is in the details. Over-protective Matt thinks “no contact sports” should mean that Anna remain celibate. Is Matt stalking her? Anna wants her space but enjoyed helping pick the nursery room color. Neither have any close friends. As a co-worker points out, “even if you’re not Together Together, it doesn’t mean you haven’t bonded.” Matt needs to know every detail about the pregnancy. Anna, estranged from her family, worries that she is getting too close. I give the film 3.0 Gavels and it receives a 6.6/10 IMDb score.

A high school dropout, Anna wants to attend college in Vermont. She’s read the manuals about being a surrogate and how she must remain detached so it will be easier to “separate” from the baby. Helping Matt prepare the nursery, shopping for baby clothes, and discussing names crosses boundaries for her. Birthing classes and exercises bring them closer physically. They even watch all nine years of Friends together. “Are we friends? To make this work, we shouldn’t be.”

From Captain Underpants and Chappaquiddick to Tag, Ed Helms is what I would call an understated actor. I don’t really buy his neurotic character (Matt), but he is the guy to try to pull it off. Transgender comedian Patti Harrison plays Anna. She plays her role just as understated as Helms, perhaps more so. As Matt oversteps his bounds, she seems more exasperated than mad. Is Matt a substitute father figure?

Jean, the ultrasound operator, hits home when she says, “I’m a tech. I know everything. I’m not allowed to say anything.” (Note to all doctors: We want to know now and we don’t want to wait for the doctor to call us in two days!) I found the awkwardness of their early dinner conversations realistic. Subsequent togetherness can be endearing. “Do you want to hold hands and eat candy and continue not sleeping together?” It is the lack of any finality that ultimately dooms Together Together.

“Beckwith’s script does have a few moments of grace and humor. Helms gets a particularly beautiful monologue about why he wants a child… But there are far more clichés, contrivances and threads left unnecessarily dangling.” Associated Press

“Together Together is a sweet film about connection that leaves some large questions unanswered and open-ended. Detroit News

Wait for this one to be streamed without paying extra. Otherwise, you will be screaming “where’s the ending?”