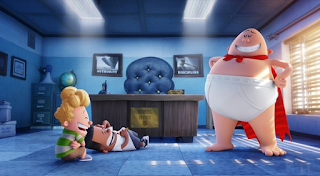 What would two fourth graders do if they were able to control the principal?  That is the premise of Captain Underpants.  George is the storyteller and Harold is the artist as they draw the comic strip character with typical juvenile humor, but their humor is not nearly as good as in the Lego movies. Given that the bad guy’s name is Professor Poopypants, you might imagine the potty humor contained in this flick.

For those of you with young children, you may be familiar with this book series which revolves around the lives of George and Harold living in Piqua, Ohio.  The author is from Cleveland to further the Ohio connection.  Principal Krupp is hypnotized by the two pranksters who then believes he is a superhero who is able to fight with unlimited underwear. Poopypants wants to eliminate all laughter in the world because people laugh at his name.

Kevin Hart voices George, Thomas Middleditch voices Harold, and Ed Helms voices Krupp/Captain Underpants.  Jordan Peele, who directed Get Out, voices Melvin as the kid in class who everyone dislikes.

One critic recommended that adults drop off their kids and return 1.5 hours later to pick them up. Probably good advice except you are warned that you will be hearing “Poopypants” over and over until you want to scream.  By and large though, the critics liked it but not my cup of tea.