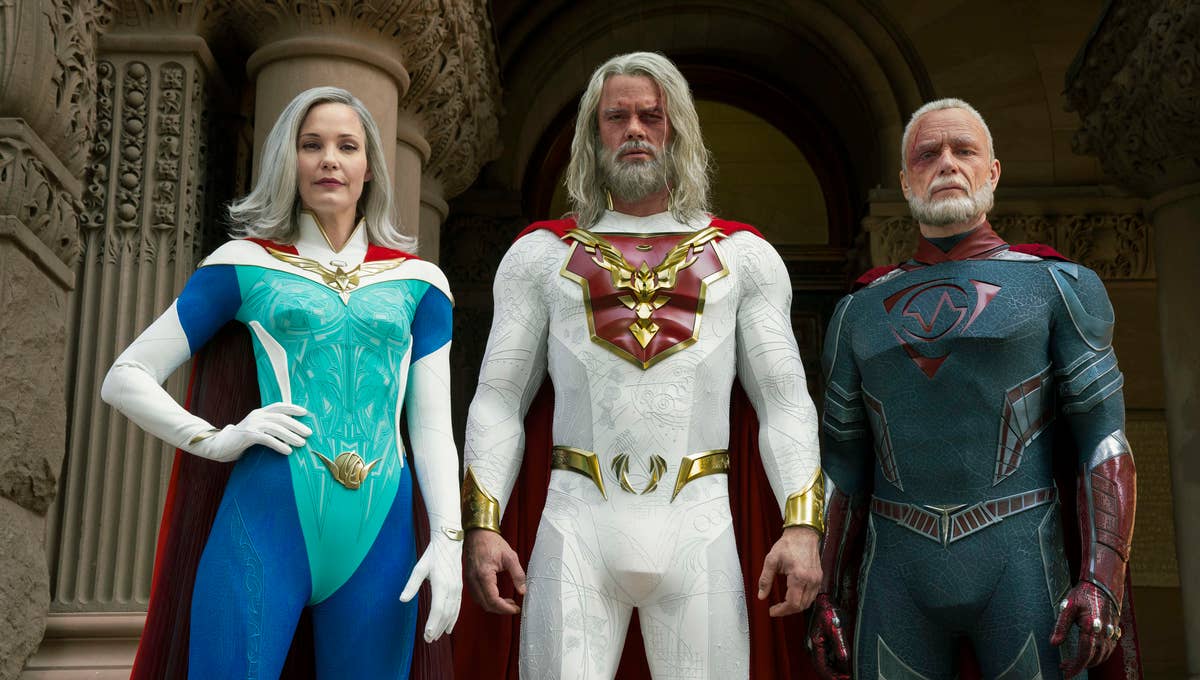 Jupiter’s Legacy is a convoluted mess. If you are not familiar with the comic book series, woe be it to the viewer trying to figure out what’s happening through episode three. It’s helpful to watch the trailer first, but most in it has yet to be shown. If you are serious about another superhero series, I suggest you Google Jupiter’s Legacy (comic) to get some background. The eight-part Netflix series flips back and forth between today and the 1930’s. Why? These superheroes first gained their powers ninety years ago. Now, it is time to pass the baton. But, is the new generation up to it?

Sheldon Sampson aka the Utopian, leader of the Union, is tired, worn out. He lives by, and sincerely believes in The Code. A superhero must never kill. “Lethal force without due process is not justice.” Yet, “the supervillains are changing the rules.” Angst is the name of the game for Sheldon. Son Brandon aka The Paragon is too emotional, too distracted to be the next Utopian. Daughter Chloe flees to the West Coast to escape the uncompromising views of her father. After all, he was “never there for us.” How did all this come to pass? Let me say that Jupiter’s Legacy takes its good sweet time getting to the point. Through three, I give the show 2.5 Gavels and it receives a 40% Rotten Tomatoes rating with a 6.9/10 IMDb score.

To avoid the spotlight as much as possible, Sheldon and Grace raised their family on a Clark Kent-type farm in Nebraska. Supervillain Blackstar escaped his supermax confinement and the Union, together with younger superheroes, must stop him. Blackstar kills three of Brandon’s friends. Brandon violates The Code to save his mother and father. Seventy-eight per cent of the public support his actions. His father, and some in the media, do not. Brandon is confined to the farm.

Voted by me as the worst wig of 2021, Josh Duhamel (Transformers: The Last Knight) plays Sheldon. I conclude Duhamel is more Sheldon of 1929 than Utopian of 2021. Headlined as one of the most powerful heroes on the planet, Grace has little to do early on. Leslie Bibb, seen in the infamous Tag film, fills that role. Chloe, rebellious model and drug user, makes an immediate impression. Elena Kampouris of My Big Fat Greek Wedding 2 fame looks the part.

Now that I have a better understanding of Jupiter’s Legacy, will I continue? Probably not. I’ve already lost too many brain cells on this one. For example, Utopia insists that Paragon had other options dealing with “Blackstar.” Death at the hand of a supervillain is an option, but one that makes little sense.

“Throughout, I kept feeling like I’d missed key pieces of plot or character development and I kept checking to see if I’d skipped episodes.” Hollywood Reporter

“Any opportunity for fun is shut down by perpetually morose teens, action set-pieces we have seen many times before and clunky speeches about the state of the world.” Guardian

Despite my concerns and lack of further participation, I feel this one could get better under tighter writing and direction. Will it get a Season Two? As of this writing, Jupiter’s Legacy is No.1 on Netflix.