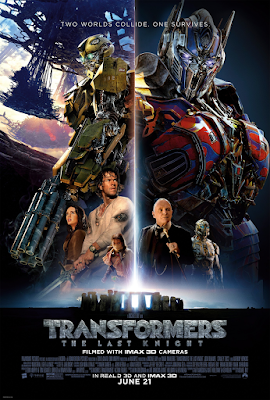 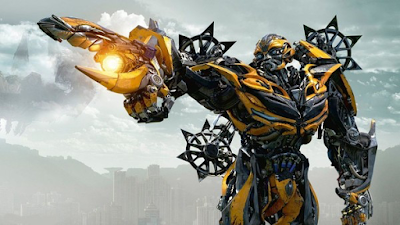 For years we have been told that there are only two things certain in life: death and taxes.  I will add a third–critics will never give favorable reviews to a Transformers movie.  Once again, I think they miss the fun!  Never have I seen so many “toys, gadgets and robots.”  And, whoever decided to put the voice of John Goodman in the ro-body of a grizzled, overweight Autobot (named Hound) was a genius.  I expected Anthony Hopkins to make a token appearance, but he (Sir Edmund Burton) was a major character throughout.

Granted, the plot is convoluted and long.  Transformers 5 starts out with Merlin (Stanley Tucci), King Arthur and the Knights of the Round Table.  Merlin first discloses the existence of Transformers and asks them to help defend the kingdom.  We find out that Transformers have been used throughout history to save the planet.  Like the Da Vinci Code, hundreds of famous people have helped keep the secrets of the Transformers, so that they may survive and thrive.  Now, the evil Quintessa from the Transformers’ world of Cybertron plans to destroy the human race so the Decepticons can take over Earth.  Cade Yeager (Mark Wahlberg) as the chosen one, Viviane Wembley (Laura Haddock) as the descendant of Merlin, and Izabella (Isabella Moner) as the cute kid are dispatched to save the world.
But, will Optimus Prime help them or the bad guys?  (By the way, the voice of Optimus Prime could easily be the voice of God in another movie.)  As you might expect with a budget of well over $200 million, the CGI is terrific and the Dinobots are awesome.  A C3PO type character is comic relief as Burton’s butler.

Other actors in the movie include Josh Duhamel as a colonel in the military who still thinks Autobots are good guys.  John Turturro helps the Burton from Cuba, of all places.  You will hear the voices of Ken Watanabe and Steve Buscemi; like Cars 3, there is no shortage of characters.

I have only seen two of these movies so it is not necessary to see them all; the backstory is provided. The movie reminds one of Independence Day although not nearly as good.  The User Score of 66% indicates the disconnect between reviewers and the viewing public.  It is indicated that Michael Bay, director, said this was the last of the Transformers franchise.  Given the scene in mid-credits, I highly doubt that statement.  Any kid who played with Transformers will enjoy this flick.  While clearly not THE summer blockbuster, it was worth the price of admission for me.  It will be interesting to see how well this movie does at the box office, especially compared to Wonder Woman.