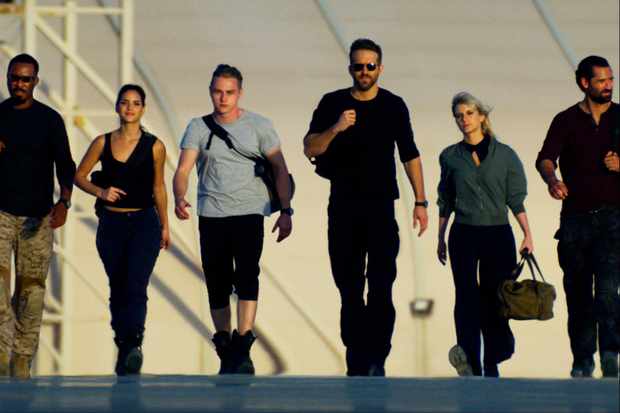 6 Undergound is a mixed bag of Transformers:The Last Knight plus Charlie’s Angels. It is a testament to the hubris of Michael Bay and Ryan Reynolds to blow up as much stuff as Netflix’ $150 million will let them. Of course, that leaves little money for things like plot and dialogue. But, hey, the locales are gorgeous, the cars are sleek, the chases non-stop. And, in the nonsensical world of 6 Undergound, you are a family when you just left them all behind. Pretty much, this film is a herky-jerky mess that lots will see because you already have the Netflix service. Otherwise, don’t join just to see it! I give the movie 3.0 Gavels and it receives a 36% Rotten Tomatoes rating with a lukewarm 66% Audience score.

One, a tech billionaire, decides that only a vigilante squad can take down the evil despots of the world. To do that, he must fake the deaths of all his crew. He recruits five, all with various skills (hitman, skywalker, doctor, CIA spook, and special ops). Years ago, the U.S. helped the wrong brother rule Turgestan. Now, that murderous dictator must be removed. In the world of 6 Underground, it’s off to a 90th floor penthouse suite in Hong Kong we go!

Ryan Reynolds is One, continuing his recent pattern of being the snarky, wise-cracking jerk with a little humanity inside. Two is Melanie Laurent, the take-no-prisoners, gun-wielding CIA spook who somehow finds time finds to fall in love with the hitman, Three, acted by Manuel Garcia-Rulfo. If this is confusing, there’s more but, suffice it to say, the luckiest actor was Six, Dave Franco, who receives an early exit.

Overall, I thought this a good concept, poorly delivered. The attempts to deliver backstories through flashbacks is more confusing than enlightening. Given the language and extremely violent, bloody images, don’t let children anywhere near the flick. Sometimes, a quote is too good to pass up. David Fear of Rolling Stone says, “This is a Michael Bay movie. It’s like someone is repeatedly poking you in the parts of your brain that register mere sensation, and keeps hammering away until a line of drool drops from your downturned lip. I get it. So do you. You’re not going to watch it. Or you are going watch it, and either decry the death of all Western civilization or pump your fists in the air. It’s another lingerie catalogue sprinkled with carnage.” I wish I’d written that!